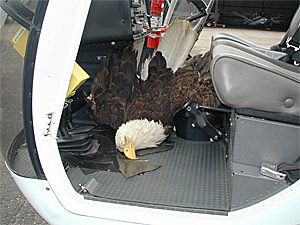 There have been at least 657 reported animal strikes on civilian aircraft in Minnesota between 2000 and November 2008, according to data released by the Federal Aviation Administration.

Nearly 500 of those strikes were recorded at Minneapolis-St. Paul International Airport.

The data shows geese are the most commonly identified bird involved in animal-aviation collisions, the majority of bird strikes are occurred with unidentified or unknown species.

Birds aren’t the only culprits — though that’s what the headlines are focused on. The data also shows that aircraft collided with 11 whitetail deer over the same period.

The above photo above is included in an analysis of the wildlife strike data (pdf). Here’s the story:

A bald eagle shattered the windshield of a Schweizer 300 helicopter at 2,000 feet AGL (above ground level) in Minnesota, 3 June 2007. The passenger was knocked unconscious and suffered cuts and bruises. Pilot landed the aircraft safely with the dead eagle at his feet.

This is the first time the FAA has released its data on animal-aircraft strikes in the U.S.

While the numbers are striking, its worth noting that the FAA does not require airports or airlines to record the strikes, and there are many incidents in the FAA’s database that do include damage records. (It’s also worth nothing that there are just 245 reported incidences in the 1990s.)

The only deaths reported due to bird strikes occurred in 2007 when a University of North Dakota flight instructor and student crashed near Little Falls after striking a Canada goose.

The FAA says that only 20 percent of bird strikes are ever reported, which, by my Minnesota math, works out to around 2,500 strikes at MSP since 2000. Those most strikes cause little, if any, damage, they are a regular part of the aviation experience.

Just take Bob Collins’ word for it. Bob’s been doing a little flying while he’s on vacation and passed along this report:

On the second-climb-out, I noticed a bird heading toward my window about 5 seconds before it quickly veered off to my left. He missed me — or did I miss him — by about 15 feet. Now I remember why I don’t like flying in Minnesota in the spring — unstable air and lots of birds.

Update: There is some discrepancy between the two databases the FAA has linked to on its wildlife strike site. The FAA turned the data over to Embry-Riddle Aeronautical University to create a searchable, online version of the information, and the numbers don’t line up.

A search for all species in the same 2000-Nov. 2008 timeline turns up 726 results for Minnesota, compared to 657 in the Microsoft Access database provided by the FAA. Embry-Riddle might have scrubbed the data from the FAA for its online presentation.

The Access file has many, many records with limited information. Many bird strikes are recorded simply as a result of airport ground staff finding bird carcasses on or near runways, with no information as to which aircraft was involved in the strike.

Update: Here’s a tally of Minnesota airports reporting more than 1 strike between Jan. 2000 and Nov. 2008.