Who’ll help the Northland, why broadcasters can’t refuse offensive ads, one small step for the ‘Mohawk guy,’ happiness and the geeky kid, and pin collecting at the Olympics.

The reaction to the Duluth area’s flood aid request from the Minnesota Legislature yesterday could — and probably should — lead to a renewed debate over what role the public has — if any — in helping victims of disaster get back on their feet.

The $190 million dollar package, which will go before a special session of the Legislature later this month, has raised eyebrows among Republican lawmakers.

There was a time when it didn’t. When the Rushford area was hit by flash flooding, the Legislature sent $160 million to the region, after supporters sweetened the package with another $58 million for other sections of the state that were nowhere near as hard hit.

Only one lawmaker — a DFLer — raised a voice in opposition. The package passed the House unanimnously, one senator voted against it in her chamber, and a Republican governor signed the legislation.

That was 2007, and while the economy had not yet fully tanked, budget forecasts were predicting a $373 million budget deficit. By contrast, the latest Minnesota budget forecast showed a $323 million surplus.

Of course, there’s plenty of politics in debates like this, but the question remains: Do we have an obligation to help others recover from disasters?

Or, as one state rep said yesterday, “If you can’t depend on government to help during a disaster, when can we?”

2) IN THE PUBLIC INTEREST

There was plenty of outcry yesterday when the first ads from congressional candidate Gary Boisclair hit KARE 11 during Olympic coverage. The ads feature pictures of aborted fetuses.

Who’s responsible for this? The politicians. A 1934 law prohibits broadcasters from censoring political advertisements. Unlike newspapers, broadcast outlets have to run the ads just as they were given to them.

Similarly, in the case that Ms. Allred complained about – asking stations to pull the graphic anti-abortion ads sponsored by Randall Terry, she posed the wrong question – alleging that the ad would be offensive and inflammatory. Stations can’t make those judgments about political ads – they have to run them even if they can be upsetting. The FCC has even been told by the Courts that it can’t allow stations to channel upsetting political ads (like those anti-abortion ads that Mr. Terry plans to run), into late night hours. If a candidate wants to run ads in the middle of the day (or in the middle of children’s programs), a station can warn its audience that the ad may be disturbing and that it is being forced by law to run it, as long as such warnings are done in a neutral fashion, but it must run the ad in the form the candidate created it. So what should Ms. Allred have argued about the Terry ads?

In recent weeks, as the Terry ad has sprouted on more and more TV stations around the country (see our article here), there have been questions raised as to whether he really is a bona fide legally qualified candidate for the Democratic nomination for president. Some have questioned whether he is even a Democrat, and recently the Democratic National Committee issued a letter addressing the subject – finding that Mr. Terry did not meet the party’s qualifications to be a Presidential candidate. Mr. Terry is contesting whether that letter is enough to take him out of the status of a “legally qualified candidate”, especially in states where he has qualified for a place on the ballot. Stations will need to make a judgment as to whether this letter itself is sufficient to disqualify him as a candidate based on some prior precedent from the FCC that seemed to decide, in a 15 year old case involving Lyndon LaRouche, that where the party declared someone was not qualified, the FCC would not second guess that determination. But the facts of that case were different, including the fact that the primaries had been completed at the time of the ad request. So we don’t know for sure what decision on this issue will come from the FCC. Watch to see if there is any FCC guidance in the few remaining days before the Super Bowl.

3) ONE SMALL STEP FOR “MOHAWK GUY”

This is the new face of NASA… 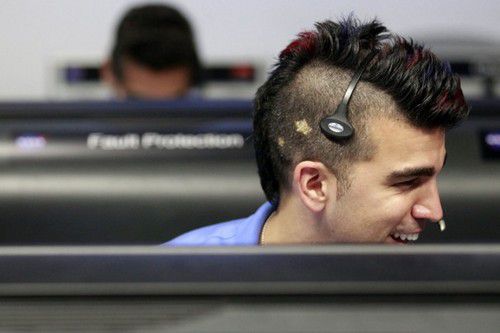 “Mohawk Guy” is Bobak Ferdowsi, a mission controller for the Mars Curiosity mission, who’s become a star since his picture was splashed across the Internet after Sunday night/Monday morning’s successful landing on Mars. He has a new hairstyle for every mission.

“The Mohawk more or less stays there the whole time. But I thought I was kind of being subtle with this one. The stars were like a little tribute, but the team actually voted on this,” he told a Seattle radio station.

Meanwhile, back on Mars, we now have video of the Curiosity’s descent to the planet…

4) HAPPINESS AND THE GEEKY

If we want our kids to be well adults, it may fall to us to give them a swift kick in the social pants, Wired.com concludes today on a study about what in childhood leads to well-being as an adult.

The New Zealand study has hope for those defined as ‘geeks’ in childhood. Popularity in childhood is not necessarily a predictor, but social connectedness is…

But social connectedness and liking school in no way implies that a kid has to be popular in order to become a well adult. More important than being the star quarterback is “having someone to talk to if they had a problem or felt upset about something,” the authors write. And participation in clubs and groups in no way implies sports. Band is just as good as football. It’s group membership and not necessarily athletic worship that builds wellbeing.

Finally and importantly, no matter the objective facts of a teen’s life, how a teen evaluates and values their life predicts wellbeing as a 32-year-old. Are they optimistic about the future, independent, and generally busy? If so, A) you have a teen that smushes every popular stereotype of Western culture, and B) you have a teen who’s likely to grow into a very well adult.

5) A SIGN THE OLYMPICS SHOULD BE OVER: PIN-COLLECTING STORIES

Which is more of an Olympic sport: BMX or pin collecting?

Lolo Jones is broken-hearted for not winning a medal. Her interview this morning was weird, though.

Visit NBCNews.com for breaking news, world news, and news about the economy

It’s all about this in the New York Times:

So she has played into the persistent, demeaning notion that women are worthy as athletes only if they have sex appeal. And, too often, the news media have played right along with her.

And the posing nude thing has never led to being taken too seriously.

Bonus I: The world of motorcycles makes its annual pilgrimage to Sturgis, SD.

Bonus II: The Twins handed the Cleveland Indians — the team I’ve followed for 50 years — their 11th consecutive loss. What if Minnesota had a franchise this sorry? (I know what you’re thinking. And, no, you don’t.)

That going-viral-quicker-than-a-homerun-off-our-starters video is a spoof of this:

I love you so much, Internet.

Bonus III: The Associated Press reports today on the subculture of hate music among white supremacists. MPR News reported on this as far back as 2004. Guess what area was one of the hotbeds of white supremacist music? The Twin Cities.

With a new NFL season drawing nearer, columnist George Will is arguing that there’s no way to make football safe without drastic changes to the game. Today’s Question: Is football fixable?

Austin’s Amanda Hocking became an Internet sensation and a millionaire with her fantasy e-novels about trolls. Now with a new series about murderous sirens, she is launching into the print world. She has a reading tonight in Woodbury. MPR’s Euan Kerr will have the story.