If states seceded, what Duluth doesn’t get, the kid who puts ‘special’ in special ed, the true cost of our clothing, and a cop, a homeless man, and a new pair of boots.

From time to time, I play a game with friends and suggest there could someday be another Civil War. They usually look at me in an odder-than-usual way and I ask, “why do you think it couldn’t happen?

If every state in the Union declared war on every other state in the Union, who would win? In the wake of some of the political puffed-up talk about secession after last month’s election, Slate has a fascinating (fictional, we think) story of the war between the states, including a battle-by-battle look at how things shake out.

Minnesota, as it turns out, doesn’t put up much of a fight against the Midwest Alliance, which was eventually defeated by the South.

First came a period of massive migration back to the homelands. Facing the newly invented discrimination that will be created, many felt the need to go back to their own people. While the individual states retained all military assets, they couldn’t control the individuals who fight. A Texas Marine stationed in California would not fight for California. A soldier in New York would not fight against her home in Virginia, and a sailor in Houston would not fight against his home state of Florida. The warriors returned to their home states, and the states had to re-consider that when they measured troop strength of their new nations. Ultimately, they measured troop strength by how much of the population would return home.

Five years passed. With all the infrastructural losses came a loss in leadership. The cities were evacuated due to no water, food, or power coming in. Towns like Ardmore, Oklahoma became overnight metropolises, taking in the flood of humanity escaping from cities like Dallas and the ruins of Oklahoma City. A local Indian casino to the South from before the war became a refugee camp for more than 60,000 people. The Oklahomans welcomed them warmly as now there was no war. There was no Texas, nor California, and certainly no America. Now everyone was simply a survivor of the Second American Civil War.

2) WHAT DULUTH DOESN’T GET

The Duluth News Tribune reports that Adam Stoningpot of Duluth says he was trying to open a discussion on race by dressing as a minstrel in blackface at the Pizza Luce employee costume party in October. Makes sense, right? Because a Halloween party at a bar is the perfect place for an intelligent conversation about race.

The revelation comes just a week or so after several University of Minnesota Duluth students got in trouble for their black face video. Duluth has had more than its share of racist incidents of late and this appears to be the latest one.

The bar where the party was held tried to throw Stoningpot out, but he stayed until the place closed, apparently still searching for someone to talk about race.

Several community leaders in the city want to meet with Pizza Luce’s management in Minneapolis about the incident.

3) THE KID WHO PUTS THE ‘SPECIAL’ IN SPECIAL ED

Annie Schaefbauer, 12, of Willmar, wants to be a special education teacher when she grows up. That should tell you something about Annie Schaefbauer. So should this: She could win an iPad if she sold items in her school’s recent fundraiser — cookie dough, pizzas and wrapping paper. Linda Vanderwerf at the West Central Tribune reports she sold $2,400 worth of stuff and was rewarded with an iPad2 on Tuesday. She turned right around and donated it to the special ed department, which needs them badly.

4) THE COST OF OUR CLOTHING 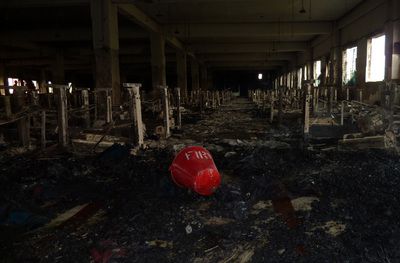 You weren’t really unaware of the conditions in which our cheap clothing is made, right?

The fire in Bangladesh that killed more than 100 workers has spawned complaints to the conglomerates here that import the clothing. Bangladesh is the second-largest exporter of clothing. More than 500 people have died in factory fires. The factories usually only have one exit and it’s usually locked.

Taslima Akhter knows all about it. She specializes in photographing factory fires in Bangladesh. She’s profiled today in the NY Times’ Lens blog.

Several of the Western companies whose clothing comes from the factory blamed their subcontractors. The Wall St. Journal said employees, who take home about $50 a month, didn’t know how to use fire extinguishers.

Photographically related: An early 1900s a photographer called Edward Curtis had a big idea: to capture on film the last remaining American-Indian tribes before they disappeared completely. It cost him his marriage and left him broke. (BBC)

Consider this picture. It’s the viral hit of the week. 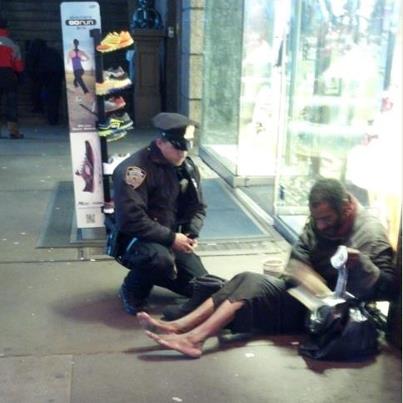 Here’s the story via the woman from Arizona who snapped the picture and posted it on the NYPD’s Facebook page.

Jennifer Foster of Florence, AZ was visiting Times Square with her husband Nov. 14 when they saw a shoeless man asking for change. She writes, “Right when I was about to approach, one of your officers came up behind him. The officer said, ‘I have these size 12 boots for you, they are all-weather. Let’s put them on and take care of you.’ The officer squatted down on the ground and proceeded to put socks and the new boots on this man. The officer expected NOTHING in return and did not know I was watching*. I have been in law enforcement for 17 years. I was never so impressed in my life. I did not get the officer’s name. It is important, I think, for all of us to remember the real reason we are in this line of work. The reminder this officer gave to our profession in his presentation of human kindness has not been lost on myself or any of the Arizona law enforcement officials with whom this story has been shared.”

Newsday found the officer and got the rest of the story. The cop’s name is Larry DiPrimo.

“I had two pairs of wool winter socks and combat boots, and I was cold,” DePrimo, 25, said Wednesday, recalling the night of Nov. 14, when he encountered an unidentified, shoeless man on the sidewalk on Seventh Avenue near 44th Street.

DePrimo offered to get him socks and shoes.

“I never had a pair of shoes,” the man replied, according to DePrimo, who’s assigned to the Sixth Precinct and has been on the force nearly three years.

The officer walked to a Skechers store on 42nd Street and shelled out $75 for insulated winter boots and thermal socks. He returned to the man, knelt down and put the footwear on him.

“He smiled from ear to ear,” DePrimo said. “It was like you gave him a million dollars.”

The officer asked the man if he wanted a cup of coffee, but he graciously declined and went on his way.

Talk of the Nation (1-2 p.m.) – The newly re-elected President Obama faces an immediate crisis in Syria, a looming confrontation with Iran, and a strategic challenge from China. Talk of the Nation originates today from the Wilson Center center for a discussion on Obama’s foreign policy.

All Things Considered (3-6:30 p.m.) – NPR looks at the next round of changes to Facebook’s privacy rules. Facebook users have complained for years about the social network’s complex privacy policy: who can see your pictures, what information apps can collect about you and so on. That’s why the social network eventually gave its users a vote on policy changes. But now, it’s trying to take that vote away.