Tornadoes, coincidence, and the spring we didn’t have 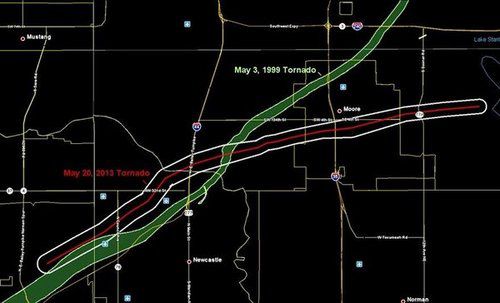 This image, from the National Weather Service, is getting a lot of attention. It shows the route of yesterday’s tornado near Oklahoma City and compares it to the route of the previous worst-tornado-in-history that hit the town.

Alan Boyle and John Roache at NBC pick apart the tracks of tornadoes in a quite outstanding article today.

The tracks weren’t all that similar, however: Monday’s tornado took a more southerly route as it moved east. And there’s nothing unique about the area’s geography to make it a magnet for super-powerful twisters, according to Bob Henson, a tornado expert with the National Center for Atmospheric Research in Boulder, Colo.

“If there were geographic features, that would tend to cause multiple tornadoes every few years,” the meteorologist and writer told NBC News. “Well, why has this been happening only since 1999?”

The similarity in the tracks of these devastating storms is “a good example for how weather events can be clustered in ways that are striking yet ultimately coincidental,” Henson said.

They also point out another truism: It’s been a quiet tornado season so far, mostly because the cold air from the north pushed deeper into the south.

That would suggest that the spring we missed out on, and the snow and nonsense of April and early May in Minnesota, was part of a season that may have spared others a tragedy like yesterday’s.

Suddenly, missing out on April around here doesn’t seem like such a bad thing.