The Minnesota Vikings coaching staff is shocked by the mentality that delivered what they insist was a cheap shot against quarterback Teddy Bridgewater in yesterday’s games against the St. Louis Rams. 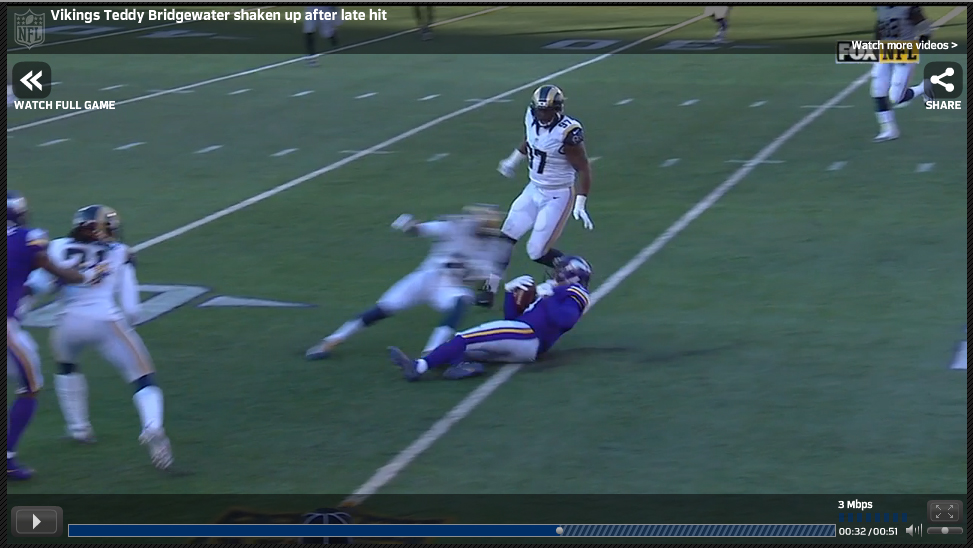 “Did you feel the hit that knocked Teddy Bridgewater out of the game was a cheap shot and could you elaborate?” Vikings coach Mike Zimmer was asked after the game.

Many Vikings fans took Zimmer’s cue and suitable objected to the notion that someone would try to hurt another player. The same fans who “ooh” and “aah’ when a Viking puts a big hit on a player.

ESPN analyst Mike Bowen, who played seven years as a defensive back, provides the rare counterpoint today, however. This is what the NFL is.

Yes, it was a brutal hit. But put yourself in the shoes of Joyner, or any defender in the NFL that sees the quarterback tuck that ball to run. I’ve been there, and regardless of who your coach is, your mindset is clear: That’s fresh meat in the open field. If you have a shot — a legitimate shot — then you drop your pads and put it on him.

Make it physical, too. That’s not meathead stuff here, it’s just football the way you’ve been trained to play. And while slow motion tells you one thing, in the pros, it happens so fast, like lightning, that defenders just can’t pull off in time to save a guy.

I’ve watched the hit from Joyner over and over. And I’ve been in those situations as a player. There was an opportunity there for Joyner — leading with his shoulder — to put Bridgewater down, to let him know that running the ball against his defense wasn’t the best idea going forward.

“Next time,” Joyner is thinking, “just hang in the pocket and make the throw, or we will take you out.” That’s the message you are trying to send as a defensive player.

Nice? No, it’s not. But that’s the reality of the NFL.

“I would say if we were out on the street, we probably would have had a fight,” Zimmer said.

Honestly, sign a waiver each year. "Here are the risks we know about football. You get paid a lot of money to assume those risks. Game on."