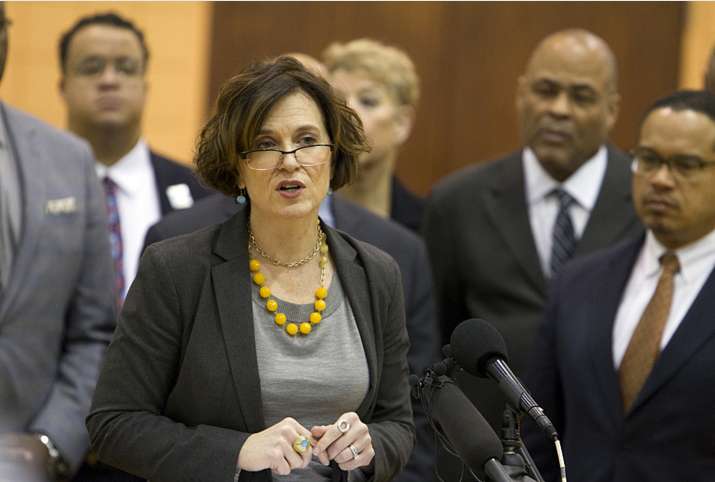 Before Richard Nixon doubled down in Vietnam, anti-war opponents in the United States offered a solution to his “peace with honor” intent that helped keep the war going: Just declare victory and go home.

Minneapolis’ political leaders tried that approach yesterday when they told protesters at the 4th Precinct that they had won all of their demands and it was time to stop their protest of the police shooting of Jamar Clark.

But the protesters knew all their demands hadn’t been met. The case will still be presented to the grand jury where, they say, police-killing cases go to die. And their demand to see the video of the killing released to the public has also not been met.

Those are two pretty big demands that pale in comparison to Minneapolis Mayor Betsy Hodges’ contention that the protest is also contributing to air pollution. There are thousands of snowblowers firing up today that spew air pollution and it’s safe to say nobody is asking people to stop.

“Everybody that stood with Mayor Hodges is not part of the solution, they’re part of the problem,” Minneapolis NAACP head Nekima Levy-Pounds called to protesters through a bullhorn, adding, “That’s not the Minneapolis NAACP saying that. That’s Nekima Levy-Pounds saying that as an individual, because I accept whatever consequences come with me speaking the truth because the truth shall set us free.”

That’s a challenge primarily to Rep. Keith Ellison, who stood with protesters last week, but was called a “sellout” at the protest site yesterday.

Late last night, Ellison tried to debate the issue on a poor place to do so: Twitter.

#4thPrecinctShutDown is tactic; GOAL is #Justice4Jamar. Action is at grand jury, not blocking seniors from bus stop https://t.co/ItCcb1lf2c

. @MayorHodges @keithellison it's crazy how u r focused on ending the #4thPrecinctShutDown but not the issues that led to it #Justice4Jamar

What if seniors need EMS services? What if EMS/fire truck takes 10 extra minutes to get to Rainbow Terrace? https://t.co/aBq4USqBSp

Didn't someone say justice takes sacrifice? That's why all these ppl are out here in the snow. #Justice4Jamar https://t.co/pTLpkEnJSS

I am STILL supportive of #Justice4Jamar; what does that mean when case is before grand jury? https://t.co/cfYZfpEKu6 https://t.co/rL3E9HuWzN

The hours-long exchange suggested Ellison will be hard pressed to maintain relevance within the continuing protest.

But politics is about controlling the narrative and public opinion. Yesterday’s news conference was aimed as much at those who aren’t protesting as those who are.

Black Lives Matters will hold a “release the tapes” rally at Minneapolis’ government center today. It’s unlikely Ellison will be asked to speak.

Meanwhile, in today’s St. Cloud Times, an editorial questioned the call to disband the protest.

Honestly, claiming it’s unsafe but then citing issues like neighbors are bothered by everything from campfire smoke to crowds (or that snowplowing will be needed) makes for a pretty weak case. Perhaps that’s why Hodges, U.S. Rep. Keith Ellison and others talked Monday about only having protesters move elsewhere. More details and deadlines were nonexistent.

As for the protesters, as long as they are civil, peaceful and don’t deliberately threaten public safety, it’s hard to think they should have to leave. Indeed, while a few of the initial nights included violence and vandalism, most recently they appear to be acting within their First Amendment rights.

In fact, if Hodges and her peers really want them to disband, perhaps the mayor should work harder to provide them tangible answers to their initial request: Release video surveillance that may show some of what happened involving Clark.

After all, 15 days after the shooting — and with no official details of that probe yet to come forth — Minneapolis leaders Monday decided to apply their considerable pressure to disbanding the protesters, not asking investigators to release that video.