Minneapolis affirms your right to take a picture of police

Of the many disturbing images that came out of the Republican National Convention in the Twin Cities in 2008, this one remains — to me — the most disturbing. 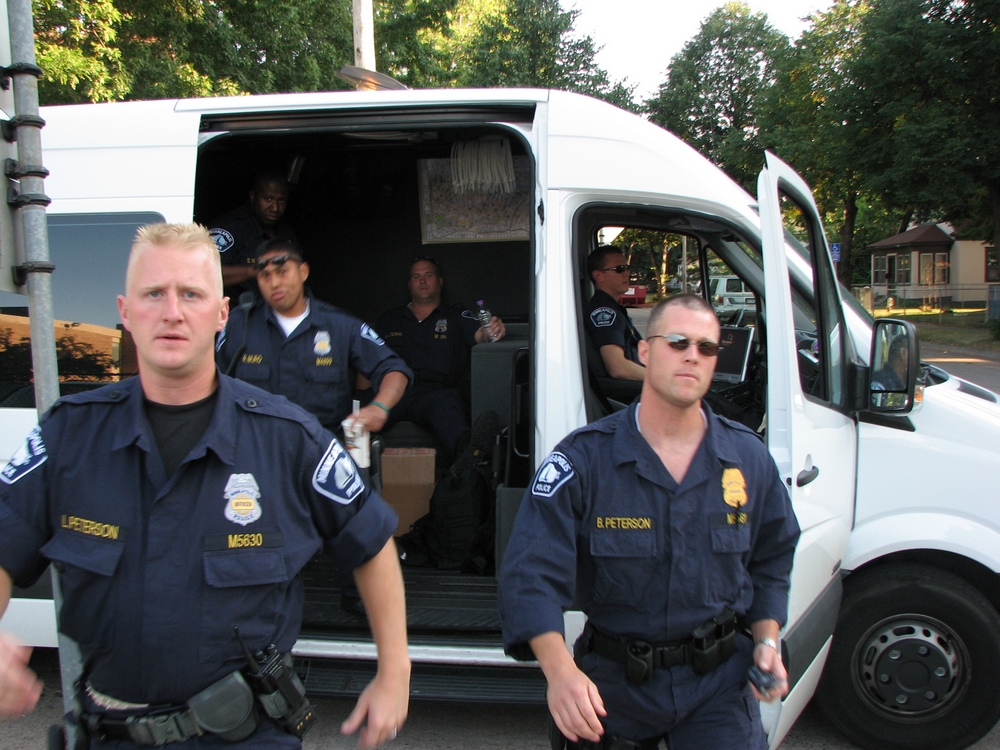 MPR News’ most street-smart reporter , Tim Nelson, described on his blog at the time the extent to which cops were freely violating the right to take a picture of cops, in this case at 41st and Dupont in Minneapolis.

One of Nelson’s sources took the picture and said the police “handcuffed him, searched his bag and camera (and) referred to him as a ‘terrorist.'”

It’s been an ongoing issue between the police and the people they serve for several years now, despite ruling after ruling that people have a right to stand on a public street and film the actions of police.

MinnPost reports today that this is all about to change in Minneapolis, where the city’s police chief is making that right clear, and she’s not getting any pushback on the declaration from the police union. Good, MinnPost’s Peter Callaghan notes, because it’s not a right either one conveys; it’s in the Constitution.

But a second part of the proposed recording policy is significant. It will state that Minneapolis officers who interfere with a resident filming or photographing them — as long as that person isn’t inhibiting the cops from doing their job — will be subject to discipline.

Acknowledgement of the policy change came at the end of last week’s meeting of the council’s Public Safety, Civil Rights and Emergency Management Committee. After a lengthy discussion of the body camera policies and procedures, committee Chair Blong Yang asked about recordings covering a different angle of a scene, from bystanders filming the cops.

“What is the police department’s position on that with regards to allowing people to use their camera phones or any sort of recording device to record the police?” he asked Minneapolis Deputy Chief Medaria Arradondo.

Arradondo, who serves as Chief Janee Harteau’s chief of staff, said the department would be coming out shortly with such a recording policy. “It will spell out specifically the citizen’s right to do that, and that officers should not prohibit citizens from doing that; and if so, the consequences,” he said.

“We tell our officers that you should assume you’re on camera all the time,” Lt. Bob Kroll, the police union boss told MinnPost. “If you don’t, you’re not going to work in this field very long.”

But Kroll said the right goes both ways; demonstrators and protesters should expect to be filmed by the cops too.

Related: Remembering when we willingly took away our freedoms (NewsCut)

The citizen’s weapon: A smartphone (NewsCut)