A Fargo TV station is being criticized for an “investigation” into the health risks posed by accepting refugees.

“Could kindness be bad for your health?” the Valley News Live story asked the other night, noting the Centers for Disease Control report that tuberculosis rates are rising in the country for the first time in 20 years. 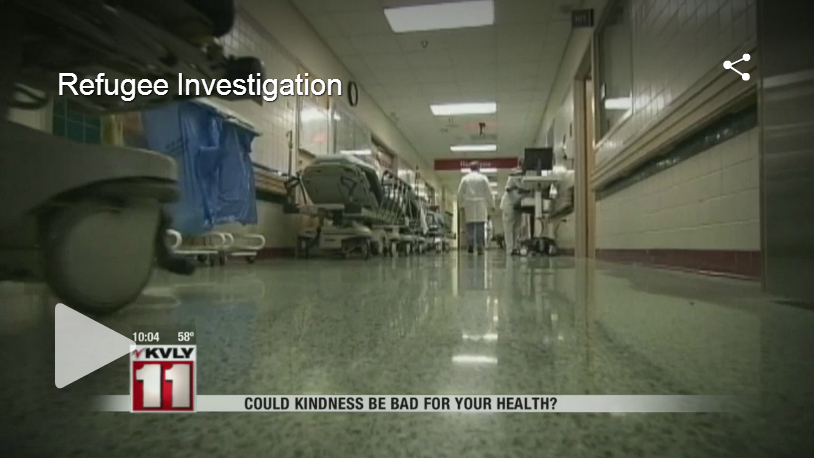 Documents obtained by the group “Judicial Watch” in April contained emails from the CDC, reading in part “We might as well plan on many of these kids having TB”. It’s from a 2014 operation where top federal health officials were sent to the southern U.S. border to stem the tide of unaccompanied children crossing into the country. Tuberculosis is caused by bacteria that primarily affects the lungs and is then spread through the air.

On page three of the Minnesota Refugee Health Quarterly from April of this year has the headline “TB Continues to Affect Refugee Communities”. There’s even a pie chart, breaking down all of Minnesota’s 150 TB cases. Over a quarter were from Somalian refugees.

The story didn’t note that Judicial Watch, one of the sources for the story, is a conservative organization that has opposed the Obama administration’s plan to increase the number of refugees resettled in the country.

The station also dismissed those who disagreed with the story, partly because they may be affiliated with organizations “pushing an agenda.”

Does this mean you need to run out and get a TB test? Apparently one east coast doctor thinks so, as one viewer told me their doctor insisted on a test since Fargo is a resettlement area. It probably wouldn’t hurt and the more informed you are about your own health is never a bad thing.

Furthermore this store had ignited much discussion on the Valley News Live social media sites. Many of those criticizing this report are not even from the viewing area, and may or may not be affiliated with organizations pushing an agenda.

The Fargo Forum, which owns competing TV station WDAY, followed up with its own story that said Valley News’ Live’s story isn’t true.

Health officials say tuberculosis is low on the list of diseases Americans should be worried about. It’s spread through the air but not highly contagious, unlike measles or influenza, said Doug Schultz, spokesman for the Minnesota Department of Health.

To get infected “requires prolonged, close contact,” he said. “Just being in the proximity of someone with tuberculosis, you’re considered a low risk.”

Worldwide, it is the most lethal infectious disease, killing 1.5 million people in 2014. But in the U.S., being infected is rare.

May is “sweeps month,” an important audience measurement period when TV stations roll out its most dramatic investigations.

“You know, it’s like people just having a disease become an entertainment for them,” Hukun Abdullahi, who watched the report, told Fargo Forum.

The backlash against the story has not been well received at Valley News Live, the paper said.

Brie Blackburn, a 28-year-old marketing coordinator in Moorhead, emailed the station to complain that it was “purposefully singling out people and creating fear for them.”

The response she received from Wareham, the general manager, had the subject line “Get a grip.”

“Brie, Thousands of our viewers are facing a health crisis that no one told them was happening. Sorry their danger is inconvenient to your political narrative,” Wareham wrote in the email, which Blackburn provided to The Forum.

“When you start implanting these kinds of views that can be so negative and taken in such the wrong context and put it back to the days where people feel that segregation is the best to keep their kids safe or keep their families safe, it just pushes Fargo way, way back into ages that nobody wants to go,” Blackburn said.