When the signs don’t apply to you

The logic of people who think rules and signs don’t apply to them could take up an entire semester of a psychology course.

The ice at Minnehaha Falls is providing a laboratory for this inspection.

No trespassing signs are posted around the area. The stairs aren’t shoveled. Even the Parks Board’s Twitter account is being used this winter to get people to pay attention.

If u visit Minnehaha Falls this wknd, pls view frm the footbridge above the falls or the overlook near the Pavillion. #staysafe #staylegal pic.twitter.com/m8EMB7KL3Y

But people go find their way down to the water anyway, in the belief that… what? That nothing bad will happen? That there’s no good reason to warn people away?

This video, from Judy Babcock, observing the Sunday scene from a proper distance, should be eye-opening. 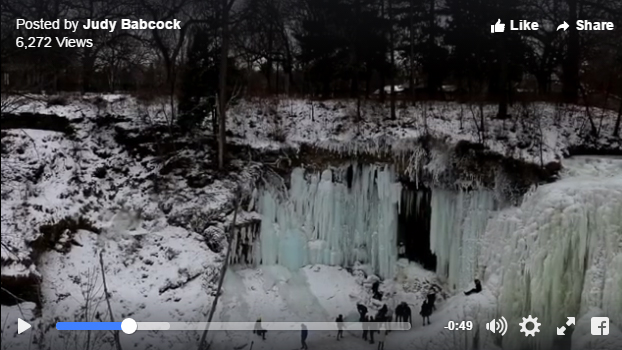 A woman was struck on the head and taken to the hospital in that incident, MPR’s Jon Collins reported.

He says this was the first injury by people ignoring the signs this year, but two were hurt last year.

In Sonoma County, Calif., signs warned drivers away from a flooded roadway after a monstrous storm dumped tons of rain on the area.

But a guy in a Hummer wanted to go through the floodwater of the Russian River anyway, so he drove around the road-closed signs yesterday afternoon.

The driver asked people nearby what was happening and was told the road was flooded with deep water. The driver responded something akin to “‘I don’t think so. Watch me,’” the chief said, quoting bystanders.

“He starts going into the water with his fancy Humvee,” Braga said, using the trademarked name for military vehicles. “Halfway across, the current picked up his Humvee…it just pushed it into the deep water off the road.

“That’s where we found him. He was all the way in the back of the Humvee, in the water, soaking wet.”

It took 21 local, county and state responders and the country sheriff’s helicopter to rescue him from the flood.