Refugee flight to Canada prompts one reporter to lend a hand

I spend a lot of time — too much time, probably — creating hypothetical scenarios that pose ethical dilemmas for journalists.

The story last week about Somali refugees trudging from Minnesota across the Canadian border to seek asylum posed one such hypothetical dilemma, or so it seemed to me.

To cover the story, journalists need to find people doing the trudging. The best place to find them, is at the border.

A CBC News team found this man crossing the border at Emerson, Manitoba. 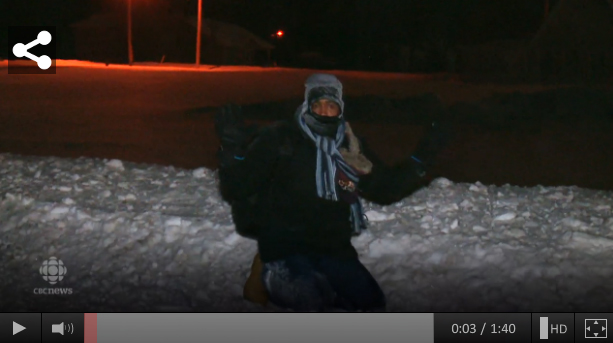 He’d been walking for 21 hours and wasn’t aware he made it to Canada until the reporter told him so. He seemed barely coherent.

So the reporter called the police and put him in his car to warm up.

A longer version of the above video (available here) features the reporter asking the police, “should we put him in the car to warm up?”

That’s the sort of question that can often be debated among journalists; to what extent should they be involved in the story they’re covering?

What would happen, for example, if a journalist on the American side found an almost-frozen refugee, and put him in the car and drove him to safety, which, in this story, is Canada?

For the record, I wouldn’t care about the ethical perception in this case. Others undoubtedly would.

From the archive: When should journalists get involved? (NewsCut)

Why, When Journalists Should Get Involved (Medium)