St. Paul skyways can be scary places at night and perhaps it’s time to consider closing them a little earlier. 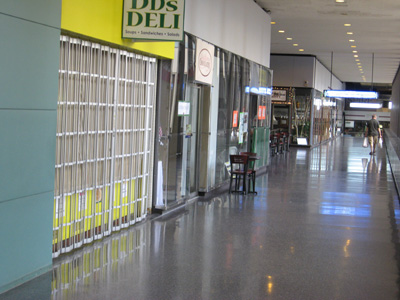 There’s not much happening downtown at night when there are no events at the Xcel Center, turning some of the skyways into the lighted version of dark alleys.

The number of homeless people sleeping in them is on the upswing. And the Pioneer Press reports the daughter of one of the biggest property owners downtown encountered a man with a knife in a restroom not long ago.

Jaunae Brooks asked the City Council yesterday to consider closing the skyways earlier in the evening.

“They poop, they pee, there’s hypodermic needles, used condoms,” Brooks said. “I was not getting any help from the city or police. It was a crazy show going on in my building.”

In her letter to the city, Brooks said tenants in her Sixth Street building, which she manages, “aren’t always able to get to their offices due to a homeless person sleeping naked in the elevator … this situation happened just this morning for the second time in a week.”

The skyways, which are public, close at 2 a.m. presently.

John Manillo, of the downtown district council, tells the paper that downtown building owners will release recommendations for the skyways next month.

“I think if we really want to be open for business downtown, we have to think about everybody who’s there because of the skyway system,” he said. “Including the patrons of bars and restaurants, and the condo owners, who invested in living downtown to be part of that system.”

But things are moving at a slow pace on the issue. The idea of closing the skyways earlier started more than a year ago, when another downtown building owner started locking things up at 10 p.m. because of “people urinating, defecating, vandalizing property and having sex in stairwells and corners.”

Not much has changed in the skyways, except the new owner of the former Pioneer Press building pulled out the carpeting because of the stench of urine.

St. Paul’s skyway complaints come as downtown activists in Minneapolis advocate for tearing them down in that city, especially now that Macy’s has closed.

Unlike St. Paul, however, Minneapolis allowed Macy’s to close access to skyways when the department store closed up each night.