Something isn’t quite right here

If you’ve got family and friends from out of town, perhaps you, too, have fielded an unusual number of calls this week that start with the same question, “What’s the deal with Minnesota/Minneapolis cops?” 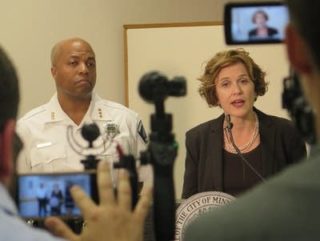 It should be a clue that, at least in the eyes of the rest of the world, something isn’t quite right here.

Richard Carlson, a former Hennepin County public defender, asks a good question in his op-ed in the Star Tribune today: “I’ve had enough. Haven’t you?”

Carlson says Minneapolis has led the nation when it comes to hypocrisy on race.

“I am ashamed of my city, of its arrogant, hypocritical police force, and of its civic leaders who have shrunk from taking on the elephant in the room for fear that they will lose the political endorsements of the all-powerful police union,” he writes in an unusually strident piece, even for a newspaper op-ed piece.

But he properly captures the frustration of many residents who are growing more than weary about the way we are policed, calling for the firing of the city’s police chief, whom he calls “ineffectual.”

Since the department can’t seem to hire and train anything but Blue Warriors, the council, rather than the department, should set the rules for what qualifies a person to become and remain a Minneapolis police officer. If the council doesn’t feel it has the expertise to micromanage how cops are qualified and trained, it can hire experts from foreign jurisdictions who don’t think of the citizenry as the people of an occupied country. The council should break up the entire command structure of the department, and demote, fire or reassign everyone in management, because these are the people who have stubbornly failed or refused to reform the culture of our paramilitary Police Department despite scandal after scandal.

I make no exception for the innocent, if there are any, because despite their oath to uphold the law, they did not stop the others.

Finally, the council should make it known that it will no longer negotiate labor agreements with the police union (yes, my Carroll ancestors are no doubt rolling in their graves), because for years the union has done everything it could to defend unfit officers and to block reform. If these things lead to expensive litigation by retrograde elements in the department, feel free to increase my taxes to pay for it. It’s time to decide who runs this town — the citizens, or the schoolyard bullies in uniform.

It is too early to draw conclusions from the latest police killing. There isn’t enough information yet and, besides, the police officer who apparently killed an innocent woman because he heard a sound that startled him isn’t talking to investigators.

But Carlson is talking about a pattern in his condemnation of the entire government of Minneapolis and, indeed, the Hennepin County justice system, he says. The signs of a problem go back at least as far as the night Minneapolis police officer Duy Ngo, who took his own life in 2010, was lit up by friendly fire in 2003.

Still, a cursory glance at the op-ed’s comments reveal that the public’s answer to his question is essentially “no.” Most people have retreated to their corners, unable to distinguish between a culture in need of inspection and an indictment of every cop, unwilling to find common ground in the basic premise that innocent people reporting an assault shouldn’t end up dead in their pajamas in a Minneapolis alley, cameras should be rolling and not at the whim of the cops who wear them, and police should be able to answer the question, “why’d you shoot her?” before the end of their shift. Oh, and throw in the occasional racism because the officer in this case was Somali, and the stew is simmering that will likely lead to a similar story again someday.

But none of that can mask the internal voice of Minnesota that is at least whispering, “something’s not right here.”

Related: Source: Cops Thought They Were Caught in Ambush (KSTP)