The state of hate in Minnesota 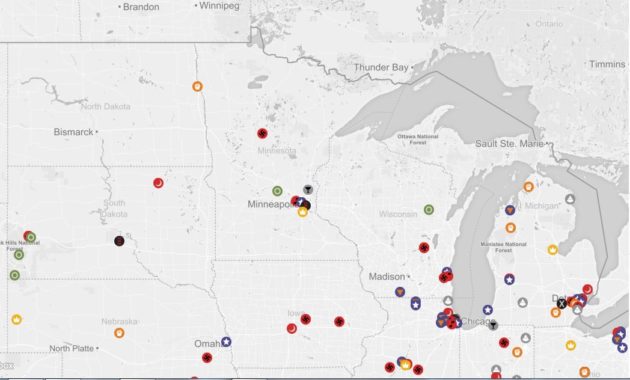 Many of us probably wouldn’t realize it, but racial and religious hate groups are still alive across Minnesota.

Racist skinhead and neo-Nazi groups have a statewide presence, and they’re just two of 10 active hate groups in the state.

After this weekend’s deadly clashes at a rally for white supremacists and white nationalists, it seems only proper that we take a look at hate in Minnesota.

Per the SPLC, Minneapolis has a Ku Klux Klan chapter, two black separatist groups and an anti-Muslim group, ACT for America.

Step out into the suburbs and there’s a radical, anti-Semitic Catholic organization called The Remnant, based in Forest Lake.

In Plymouth, there’s a “hate music” company called Behold Barbarity Records. The record company recently made headlines on the prominent metal blog Invisible Oranges for selling a Nazi T-shirt including German text that translated to “the Jews are our misfortune.” (The shirt isn’t listed on the label’s online store anymore.)

Here’s the SPLC’s statement for how it defines hate groups:

”All hate groups have beliefs or practices that attack or malign an entire class of people, typically for their immutable characteristics. The SPLC list was compiled using hate group publications and websites, citizen and law enforcement reports, field sources and news reports. Hate group activities can include criminal acts, marches, rallies, speeches, meetings, leafleting or publishing.”

The number of hate groups across the U.S. is increasing, the SPLC says. Their current count is at 917 active groups.

There was a dip during Barack Obama’s presidency as hate groups moved online and underground, according to the SPLC. But in the past two years, the nonprofit says, “in part due to a presidential campaign that flirted heavily with extremist ideas, the hate group count has risen again.”

The SPLC has been criticized in recent years for its massive endowment of over $200 million and its leaders’ $330,000-plus salaries.

Some say it’s become a partisan shill for progressive causes, rather than the publicly minded civil rights organization it started as in 1971. The Hate Map, critics say, sometimes is fast and loose with how it defines hate groups.

But one reason for that could be a lack of agreement on what “hate” is. Journalists struggle to aptly describe racism and hatred, and apparently academics do, too.

“I do think there is a desperate need for more objective research on hate crimes and domestic extremism—especially now,” terrorism researcher J.M. Berger told Politico Magazine for a piece on the SPLC.

One possible solution: Dig into the Hate Map and research these groups for yourself.

And if you see something hateful, tell us about it. MPR News has joined Documenting Hate, a crowd-sourced project led by investigative journalism outlet ProPublica.