Keillor: Liberals elected Omar to ‘feel better about themselves’ 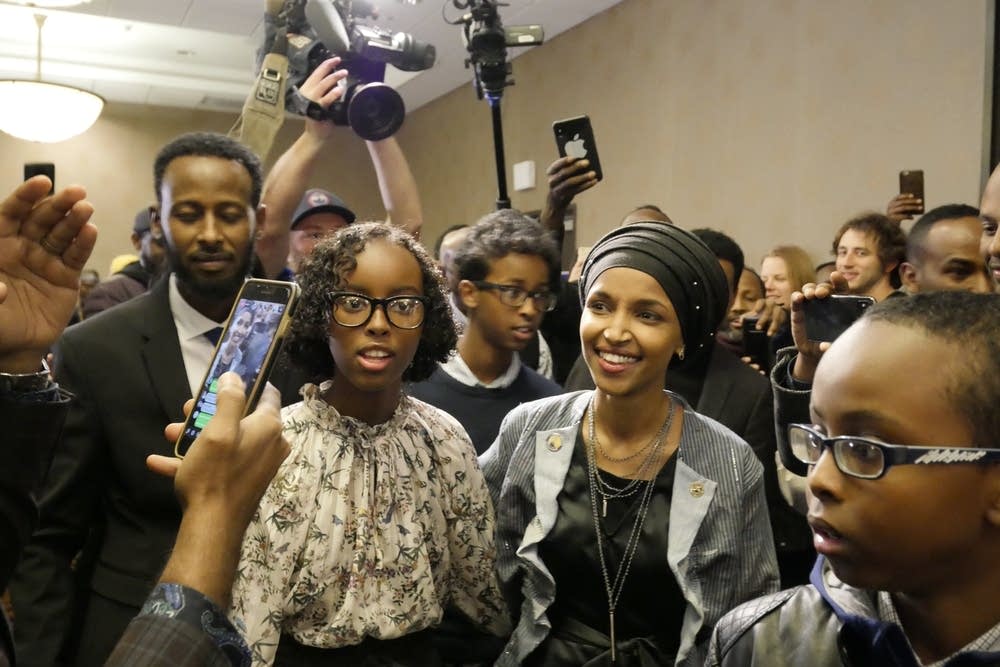 Garrison Keillor has gotten some people stirred up again thanks to his assessment of the election of 2018 and, specifically, the election of the first Somali-American from Minnesota to Congress. 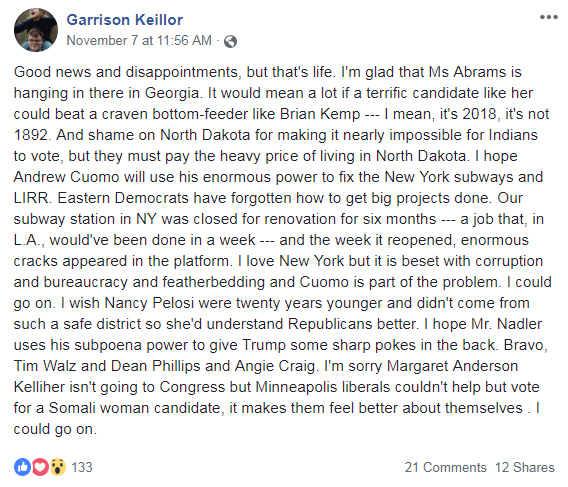 It’s just as well he didn’t, although he was urged to do so by some Facebook “fans.”

“Wait and see,” he replied.

It’s hardly the first time the humorist has used cryptic innuendo and mystery to belittle a winning candidate. His 2002 article in Salon following Norm Coleman’s election to the Senate seat still stands as the definition of crossing the line.

Norm got a free ride from the press. St. Paul is a small town and anybody who hangs around the St. Paul Grill knows about Norm’s habits. Everyone knows that his family situation is, shall we say, very interesting, but nobody bothered to ask about it, least of all the religious people in the Republican Party.

Sixteen years later, Keillor is using the new coded language in Minnesota politics, particularly in districts where demographics are changing and the old guard is reluctant to see the value in that fact, suggesting that a woman of color didn’t earn her victory on Tuesday night, and that she wasn’t qualified to hold a congressional seat, but that she only made it to Congress on liberal — code for white — guilt.

He didn’t mention her by name.

Ilhan Omar was in the MN House of Representatives and is the first refugee to be elected to Congress. She is smart, assertive, and eloquent. Kelliher is a middle aged Caucasian woman with no direct civil war, refugee camp, immigration or poverty experience, so I would say Omar has far more experience with global issues than Kelliher does, as this is obviously experience the largely white male Congress needs.

MN is already sending 4 other white women from this election. I find your comment offensive, dismissive and vaguely arrogant that people in Minneapolis voted for Omar to feel better about themselves. She is highly qualified with her own set of knowledge, skills and experience, and 78% of the vote in CD5 recognized her for it.

Keillor’s bravos for two white DFLers with little political experience — even compared to Omar — suggests there’s something more to this.

A longer view suggests Keillor was channeling his inner Phyllis Kahn. Omar defeated the long-time state representative from Minneapolis in 2016, a loss she’s appeared to brood about publicly ever since.

Keillor’s comments in many ways mirror Kahn’s August interview with the online news site “The Intercept” as the three-way race between Kelliher and six-term state rep Patricia Torres Ray wound down.

Kahn criticized Omar for using her immigrant status as a “selling point,” calling it “a sign of weakness.” She also said Omar was anti-Semitic.

“The young woman has done a very good job mobilizing students to get out to the caucuses and she’s also very attractive to the kind of, what we call the young, liberal, white guilt-trip people,” she said. Like Keillor in his Facebook post, Kahn didn’t use Omar’s name.

Kahn and Keillor are politically united and personally so, too. The former legislator has made no secret of her support for the former Prairie Home Companion host who, though retired from that gig, lost his homegrown luster when American Public Media severed ties with him over sexual harassment allegations.

As you listen to the MPR request for funds remember how they treated Garrison Keillor.

Kahn offered no congratulations to her new representative in Congress after Tuesday’s election. Instead, on Wednesday, she took one more shot.

Clarification (Nov. 10, 2018): This post has been updated to clarify the nature of the separation between Keillor and MPR.