NewsCut flashback: 13 reasons why not

According to a study published Monday in the “Journal of the American Academy of Child and Adolescent Psychiatry,” teenage suicide spiked 28.9 percent after the Netflix series “13 Reasons Why” premiered in 2017.

That’s 195 dead kids more than would have been expected.

Researchers warn that their study could not prove causation. Some unknown third factor might have been responsible for the increase, they said.

Still, citing the strong correlation, they cautioned against exposing children and adolescents to the series.

“The results of this study should raise awareness that young people are particularly vulnerable to the media,” study co-author Lisa Horowitz, a staff scientist at the National Institute of Mental Health, said in a statement. “All disciplines, including the media, need to take good care to be constructive and thoughtful about topics that intersect with public health crises.” 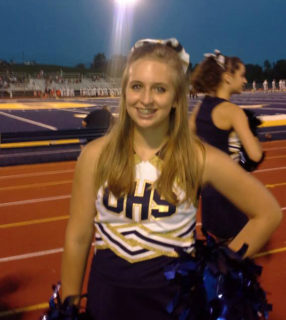 Several schools in Minnesota have issued warnings to parents about the Netflix series “13 Reasons Why”, which many school-age kids are watching without supervision. The problem is it shows an explicit scene of the main character’s suicide (a video of which has finally been removed from YouTube this week), and each episode reveals another person at the character’s school responsible for her decision to take her own life.

In Minnesota, suicide is the second-leading cause of death for teens.

In Michigan, some students have a better idea.

Riley Juntti started the morning school announcements at Oxford High School this week with this.

“Worthless. Self-centered. No morals. Easy. Grimy. Cake face. You would be better off dead. That’s just the start of what you would label me as everyday for two years.”

That’s the sort of bullying that pushes teens toward suicide.

But then Juntti continued…

“This tape is for you Elise Godfrey. You saw me when no one else did and continued to listen, share and appreciate the small things with me. Thank you for your kindness I can not repay. You are one of my 13 reasons why not.”

Juntti is one of several students who this week kicked off the “13 Reasons Why Not” campaign in which they reveal their struggles and thank someone for helping.

It was started by teacher Pam Fine in memory of Megan Abbott, a freshman student who completed suicide four years ago, according to The Oakland Press.

“The idea was to come up with 13 reasons why not, because that was not portrayed in the show. … Even though it can get very dark, there is always hope. Our message is that there are no 13 reasons why. Suicide is not an option,” Fine told reporter Monica Drake.

“Standing up for what is right has always been more important to me than my peers’ approval, and this project wasn’t an exception,” she said. 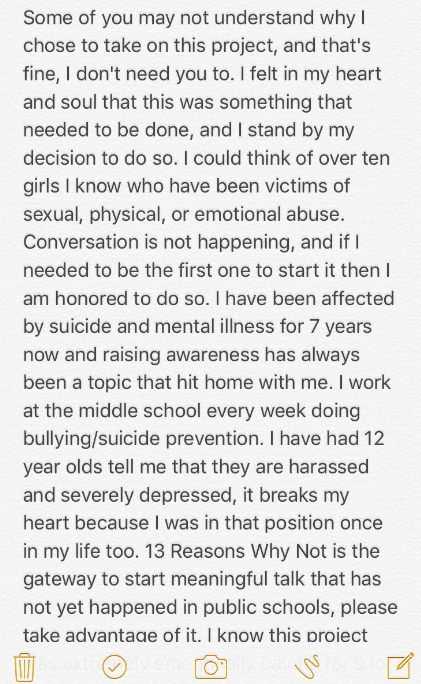 “Life is always worth living,” she continued. “There are people who love you and your value is not tarnished by other people’s perceptions.”

Something amazing happened after Juntti stepped forward. Students rallied around her.

And they rallied around the captain of the basketball team, Jordan Jaden, who revealed the next day that he was struggling with degrading text messages from a family member after his mother moved away.

“I’ve had no one to talk to, and it’s been hard,” he said. “I know I could have given up a long time ago. … My reasons to live are my two little sisters and my mom.”

Kids started talking about their struggles. Many asked to be allowed to be one of the students between now and May 27 to get to share their stories during the morning announcements, and reveal the people who gave them reasons not to take their own life.

“Oxford has come together to create an environment this past week where talking about mental illness is socially acceptable. … I’ve helped people come forward with their struggles and that’s more than what I can ask for from this project,” teacher Pam Fine said.

“I think if Megan had something like this going on in school when she was there, we would have had more time with her,” said Morgan Abbott of her sister, who took her life in the wood’s next to the school.

But she has been heartened by the single message that has been scrawled on mirrors and stalls in the bathrooms that represent reason No. 1.

Related: Facts About Teens, Suicide And ’13 Reasons Why’ (NPR)