You Should Meet: Jeff Ryan 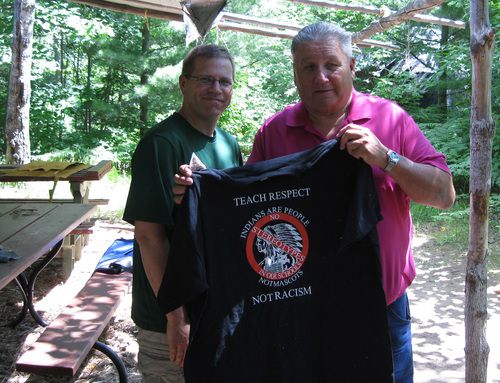 When he was a young man growing up in Frederic, Wisconsin, Jeff Ryan (shown above left presenting a T-shirt to Lac du Flambeau Tribal Chairman Tom Maulson) hid in the back seat when his dad drove through the St. Croix Chippewa Reservation. “Boy, has the worm turned,” he told me last week.

“If I’m going to have car trouble, there are only two places I’d want to break down,” he says. “One is in my hometown. The other is the Lac du Flambeau reservation.”

Ryan, a 23-year veteran history teacher at Prescott High School, has become one of the band’s best friends. He was nominated for NewsCut’s The People You Should Meet series by former student Joseph Pruden of Minneapolis

In the late ’90s, he took up the challenge of meeting state requirements about teaching Native American history by creating a one-semester course dedicated to the topic — called “Native America Since 1790”. This class has made a lasting impact on students and into the community. Since 2000, he has been taking students up to the Lac du Flambeau reservation to learn firsthand about Native culture (past and present). In 2003, he began offering this same experience to anyone in the Prescott community. Through his work in Native American education, Jeff has developed strong ties with many leaders in Wisconsin tribes. Over the past couple years, a group of his students have taken up the issue of race-based mascots, and their voice has been highly influential. These students were invited to speak before committee at the Wisconsin Senate regarding a bill about race-based mascots, which was ultimately passed and signed into law. He has appeared on Wisconsin Public Television discussing these issues, and his students were featured in a documentary about their efforts to encourage legislation limiting its use.

On top of this, Jeff is also a baseball coach, and a pretty terrific one at that. He has led the Prescott Cardinals to many conference championships and (I believe) one state runner-up. He was even invited to speak at a national coaches’ conference in Oklahoma a couple years back.

Ryan’s passion for Native American issues comes from the confrontations between white fishermen and Native Americans on the shorelines of northern Minnesota over spearfishing and treaty rights. The “Walleye War” started in 1983 when a federal appeals court upheld the bands’ off-reservation rights.

Ryan headed to the northwoods to research the issues in the dispute.

“I graduated in December and I was interested that this was going on,” he said. “I went to a couple of landings on a fact-finding mission. I began there as a person to see what was going on, then I got labeled as an ‘Indian lover.’ It motivated me to find out more and motivated me more to become a treaty rights supporter. Going to the landings and seeing some of the awful stuff, it was terrible.”

Not long after, Wisconsin passed a law requiring schools to include the history of local tribes and treaties in school curricula. Still new in Prescott, Ryan developed the class in 1998 — First Nations issues with the Lac de Flambeau.

It is one of the most popular classes in the school.

“We’ve had over 250 people from this town go up and have an extended stay up there,” he says. “It’s been for me the best thing that I’ve ever done as a teacher. It’s phenomenal. What that has done for me professionally, educationally, personally… what it’s done for a lot of students is immeasurable.” 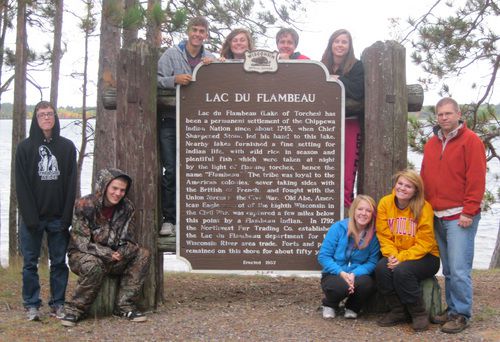 To go on the trip and participate in a service project while on the reservation, students (the 2011 students are shown in the above photo) have to write an essay on why they want to go on the four-day journey. Teachers judge the essays and select the winners, but have no idea who wrote them.

“In the final list, there are special ed kids, there are ‘problem kids.’ You get a great cross section. There’s a kid who’s gone back there 14 times,” Ryan says.

His class began discussing race-based logos and mascots in 2008, and in 2010 some of Ryan’s students took it upon themselves to research the issue and then lobby state politicians on behalf of a proposed law allowing school district residents to lodge complaints against race-based names (documentary video here).

“The one thing about those students is the work they did and how much work they did,” Ryan says. “I get testy when it’s intimated I’m telling them what to do.”

The Prescott Eleven, as they became known, testified in support of the bill in Madison. It passed and was signed into law by then Gov. Jim Doyle. The Prescott students were invited to the bill signing ceremony.

“The whole key is we talk about the issue in the classroom,” according to Ryan. “There’s dialogue here. They don’t talk about it the way it should be talked about in these other communities.”

He says his school’s administration has shown a lot of trust in his ability to present controversial issues objectively. “It’s a challenge to talk about (Gov.) Scott Walker in the classroom,” he acknowledges. “It takes an ability to be empathetic and understand why that person in Hudson thinks Scott Walker is phenomenal. To avoid controversial issues is irresponsible.”

In his 23 years of teaching, Ryan says he’s given only one in-class detention. “I can remember it like it was yesterday. I was embarrassed by it… that I couldn’t handle it. I apologized to my principal.”

He also acknowledges, “I’m pretty intimidating. I kind of like the military approach to discipline. Students want order, they want to learn, they want to accomplish something. Anyone who says they like classes where nothing happens, that’s not true,” says Ryan, who calls parents on Wednesday evenings to talk about their child’s performance.

Mr. Ryan is also the school’s baseball coach, which he insists is a harder job than teacher. “There’s no comparison,” he says. “Teaching is the easy job.” 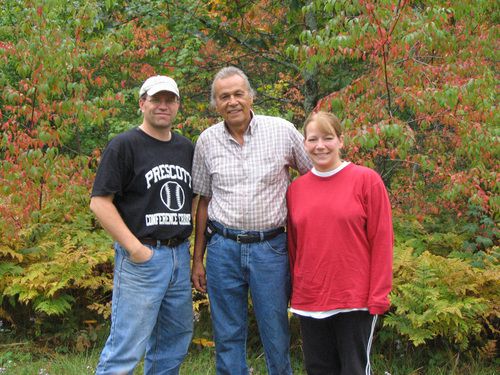 That might partly be because in a small town of 4,000, the baseball team is expected to win because it has consistently been among the best teams in the state. But it also takes a toll on a coach’s life. “I’m kind of isolated,” he says.

“”I don’t spend a lot of time out and about during the baseball season.  Sometimes being seen with parents at restaurants or other public places in a small town can be problematic,” he says.

In his tenure, 48 players on his teams have gone on to play college baseball.

In many ways, baseball is linked to his interest in Native American issues and his career. His brothers played for a club team from the Sand Creek community. “We’d go to the games and watch, and the Ryans would be the only non-Indians at the game. It was great,” he says.

His brother, Stewart, born with Down Syndrome, added inspiration to his interest in education. “My experiences with him were crucial to our growing up. There’s an old quote — ‘every person I meet is in some way my superior,’ — and we used that with my brother. it was a sad day when he passed away, but we see all the things now he was able to do.”

“Whenever we needed a homerun off the barn, it was my brother Stewart,” he says.

In his twenty-third year of teaching, Ryan has seen an increasing vilification of his profession. “It goes hand in hand with the word, ‘union,'” he says. “But speaking as a taxpayer and a teacher, you can’t be afraid of being held accountable. All people are expected to do their job. In this day and age, we’ve got to be able to demonstrate as a school teacher that people are getting their money’s worth.”

He pauses for a moment and then adds, “People in the public sector are easy targets.”

Do you know of someone we all should meet? Who’s the most interesting person you know? Submit their name and tell me why.