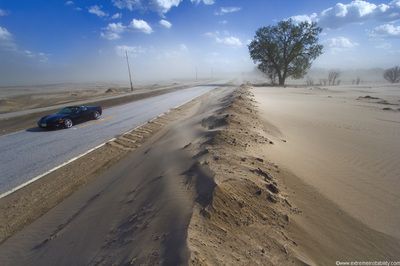 We don’t often revisit floods in the Upper Midwest once the water disappears. But it turns out last year’s tremendous flooding on the Missouri River has left a desert in the breadbasket of eastern Nebraska.

The stormchaser at ExtremeInstability.com — known to us only as Mike — has posted unbelievable pictures of the the post-flood debris, primarily tons of sand left behind.

It’s everywhere, and the wind only makes it worse. And yet, some crops are growing around it. You put up with a lot when you’re a farmer.

A new video that leads to the question nobody in a position of power ever seems to want to answer: How is an abandoned house worth more than one in which someone lives?

Forgotten from Michael Cameneti on Vimeo.

Elsewhere on the foreclosure front, the Pioneer Press reports the days appear to be numbered for JT’s Hamburgers, a West St. Paul eatery from the 1950s.

Alex Balluff, of Duluth, beat the odds. He was given only a 1 percent chance or survival when he was struck by a hit-and-run driver in 2009, the Duluth News Tribune reports. He’ll be a guest of the Minnesota Timberwolves at their last game tonight, and maybe shoot a few baskets with our local NBA heroes. His parents will take a lot of pictures because very soon, Alex won’t remember any of it.

And how’s your life going, person who wouldn’t stop to see if Alex was OK after you hit him?

“I know up on top you are seeing great sights, but down here on the bottom, we too should have rights.”

If you’re a Dr. Seuss fan, you may recall that line from Yertle the Turtle.

It’s at the heart of a kerfuffle in British Columbia between a teacher and a school administrator who, the CBC is reporting, vetoed the use of the quote in a classroom. The teacher’s union in the district has been in a contract dispute.

The superintendent calls the issue “a red herring” and says he doesn’t care if Yertle the Turtle gets read to schoolchildren, as long as it’s not part of a political message. The teacher’s union, obviously, disagrees:

“It’s not even just limiting the teachers’ right to freedom of expression,” she said. “It limits students’ access to the world around them and what’s going on in current events. And I think that’s the purpose of public school, to educate and use what’s happening around them as teachable moments.”

But Stigant said if teachers want to talk to students about labour disputes in general as part of a curriculum, that’s one thing. To expose their captive audience to their own job issues through discussions, posters or buttons is going too far.

“I would not think it was appropriate for my child to go to an art class and be engaged in instruction and conversation about political rights and disputes and that kind of thing. That’s not the teachers’ job.”

Norwegians have been getting a bad rap from this side of the ocean for their patient trial of the man charged with slaughtering children at a camp last year. The National Review went so far as to say it’s Norway that’s on trial.

The killer, Anders Behring Breivik, says a popular song in the country is “brainwashing” children. He singled out singer Lillebjoern Nilsen as a “good example of a Marxist who infiltrated the cultural sector, writes music that is used to brainwash children”. One of his songs, Children of the Rainbow, is a Norwegian version of American folk music singer Pete Seeger’s Rainbow Race.

So thousands of Norwegians answered him by gathering in Oslo in the pouring rain. To sing.

Bonus I: Every other Friday afternoon, we get nagged to fill out our time sheets for the people in payroll. If you’re reading this, bosses (and I think we’re going to learn something here), I have this suggestion:

Bonus II: Remember when Minnesota had mandatory emissions testing? Is it time to go back to it? Seen yesterday on Concord St., in South Saint Paul. 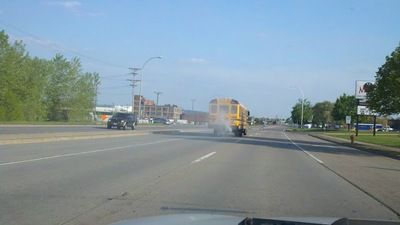 A medical debt-collection firm used aggressive tactics to extract advance payments from patients, according to a highly critical report issued this week by Attorney General Lori Swanson. Collectors sometimes made bedside visits or approached people waiting for emergency room care. Today’s Question: What limits ought to govern the behavior of medical debt collectors?

Daily Circuit (9-12 p.m.) – First hour: Daniel Levitin, professor of psychology, behavioral neuroscience and music at McGill University. He is the author of “This is Your Brain on Music.”

Second hour: The media today is filled with reports of the failing American education system – low test scores, poor graduation rates and the need for reform. But many reports show that students are actually performing and graduating at higher rates then ever before, so where’s the disconnect? Paul Farhi argues that poor media coverage and sweeping generalizations about American schools are presenting a false picture that may have negative effects for our education system.

Third hour: Celebrity chef Rocco DiSpirito once claimed on national television that restaurants have a 90% failure rate which left some industry watchers and owners wondering where he got that statistic. A couple of leading studies show the failure rate closer to 23%, about on par with other small businesses, yet that 90% number is ingrained in both insiders’ and conumers’ minds as truth. Such a false notion makes opening a restaurant an uphill climb. What is the reality behind the notions and numbers of the restaurant industry?

MPR News Presents (12-1 pm):Cancer doctor David Agus, speaking at the Commonwealth Club of California about his new book, “The End of Illness.”

All Things Considered (3-6:30 p.m.) – MPR’s Brandt Williams will have the latest on the Amy Senser trial. Her husband, former Viking Joe Senser, continues his testimony today.