What choice would you change, the world’s largest plastic building is in Minnesota, tears in the news, and people who do good by doing wrong,

If you’re not careful in this news business, you run the risk of making the difficult choices and dilemmas that people face into an academic exercise. It’s easy to do if there isn’t a face, name and story to it.

Journalist Rick Ellis dropped me a Twitter message yesterday to alert me to a trip he took to Iowa recently with a Burnsville woman to visit her daughter’s grave. It’s a stunning piece of work and humanity:

“The birth itself actually went fairly smoothly,” Peters said. “I had a C-Section in order to lessen the trauma and when I first saw my daughter, she looked like a little angel.” Her voice quivers and then she goes silent. She quietly stands up and walks away. Surprised, I jump up and hustle to follow her towards her car. We drive off and for the next 45 minutes neither one of us says a word. Finally, she continues her story.

“The nurses hustled us into an ICU unit and they started hooking Becky up to machines. She was having trouble breathing and she kept changing colors.” She shakes her head slowly from side-to-side, as to emphasize her words. “We wanted to see our daughter, but not like this. She was hurting….our angel was dying and….” She swallows hard and regains her composure. “We didn’t think it would be this way.”

Evelyn and her husband spent the remainder of their daughter’s life sitting by her side. At first, Evelyn couldn’t hold her, but as the baby’s health progressively deteriorated, she was removed from some of the technology so her parents could say their goodbyes and offer what comfort they could.

What choice would you change if you could?

Could the answer to the mysteries of the universe be in Minnesota? A ribbon-cutting today will mark the beginning of the NOvA far detector southeast of International Falls. The particle detector will study neutrinos. Neutrinos are the ghosts of the universe. The Ash River detector will use 15,000 tons of mineral oil and PVC plastic containers.

“As far as we can tell, it will be the largest PVC structure ever built,” laboratory supervisor William Miller tells the Duluth News Tribune. “It’s 15 million pounds of PVC. It’s big.”

So now we have that and the largest ball of twine.

Meanwhile, the people who will solve tomorrow’s mysteries — the kids at Massachusetts Institute of Technology — were studying up by dropping a piano from their dorm yesterday, to celebrate the day they can drop classes without it going on their record:

3) THE TOPIC IS TEARS

There should be more crying in poliltics.

Hyman Strachman, a 92-year-old, 5-foot-5 World War II veteran trying to stay busy after the death of his wife, has spent at leasat $30,000 of his own money breaking the law. He makes bootleg copies of Hollywood hits and sends them to soldiers in Afghanistan and Iraq, the New York Times reports.

“It’s not the right thing to do, but I did it,” Mr. Strachman said, acknowledging that his actions violated copyright law.

“If I were younger,” he added, “maybe I’d be spending time in the hoosegow.”

Originality will get you no points with the Minnesota State Patrol, who stopped a woman on I-35W south of Minneapolis in the MnPass lane. It turned out the carpool passenger was a mannequin. 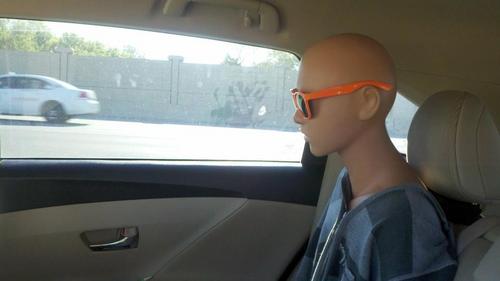 The woman got two tickets. She was also driving on a suspended license. From the looks of things, they let the lack of a seat belt on the passenger slide.

Bonus I: Behind the scenes at APM’s Marketplace.

Bonus II: I never get tired of this story…

Whatever happened to the kid? He’s 23 now. Today, he’s in Fargo, capping off Autism Awareness Month.

Congress is considering whether to renew a cap on the interest charged on federally subsidized student loans. At more than $1 trillion, student debt now exceeds American credit card debt. Today’s Question: What, if anything, should be done to ease the student debt burden?

I will not be posting today. I’m taking the afternoon off to go watch my son jump out of an airplane (weather permitting), and this morning I’m leading a tour of MPR for employees. See you Monday!

Third hour: The White House LGBT Conference on Families is tomorrow in Minneapolis. What are the main issues facing LGBT families in Minnesota and the country?

MPR News Presents (12-1 pm): Cancer doctor David Agus, speaking at the Commonwealth Club of California about his new book, “The End of Illness.”

Science Friday (1-3 p.m.) – First hour: Bell Labs. They called it the Hells Bells Laboratory. And it was the inventive genius behind cell phones, satellites, lasers, and transistors. Plus, astronaut John Grunsfeld on the future of NASA science.

Second hour: A look at a new play — Headstrong — that tackles the subject of sports and concussions. Also: Is the next gold rush in space? A look at a new venture to mine mineral-rich asteroids.

All Things Considered (3-6:30 p.m.) – Attorney General Eric Holder is wrapping up his first — and likely his last — full term. He sits down with NPR to talk about the issues that could mark his legacy: from terrorism trials to Trayvon Martin.