The unanswerable questions in Cold Spring

This is the part of the day — around 11 a.m. or so — when the pressure is on to put something new and fresh on NewsCut. A news blog is a beast that has to constantly be fed and most of the time, I can usually find something that fits. Sometimes it’s funny or at least a little offbeat; most of the time it’s a story that’s out of the glare of the daily news.

Everything I’m looking at in the world of news looks trivial to me in the aftermath of the death of Tom Decker, the Cold Spring police officer who was killed last night when he went to check on a man who might be suicidal, MPR reports.

Like you, perhaps, I don’t really know what to write and yet I have these questions without answers at which I want to scream my frustration. 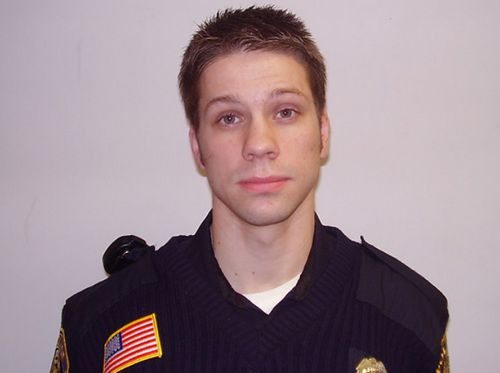 A kid. The same word Cold Spring Mayor Doug Schmitz used this morning. “There’s a lot of people in shock wondering how we could lose such a nice young officer,” Schmitz said. “Tom was a very well-liked kid.”

I see a kid who cared about his town and died making sure someone else in town was OK, not at all different from the viral video I pointed to yesterday of a cop who bought boots and socks for a homeless man in New York, because the regular folks were walking by laughing at him.

I’m aware of the indecent opportunism that people with an agenda have at times like this, and yet I see yet another shooting in Minnesota that should have us asking how people who might have some mental health issues are able to get a gun and kill four kids’ father? But we can’t get that answer, partly because when Minnesota passed the concealed carry law, its benefactors made sure we couldn’t get an answer to that question. It is illegal for the police in Cold Spring — or anywhere else — to answer this question: “Did the person who killed Tom Decker have a permit for the gun?” (note: if, indeed, he carried it at some point)

What if we knew the answer to that question? Maybe we could do something so that other 31-year-old cops don’t end up dead on a street outside a bar, and maybe we could do it in a way that doesn’t send everybody off to their corners on talk radio. Maybe it could be in the interest of something we have in common. Maybe.

I see the usual questions of faith that I have in times like this. The same ones I wrote about after the shootings in Colorado. I see a story in the Fargo Forum this morning that a lawmaker says it’s “immoral” not to mine coal, gas, and oil because “God put it there for us.” And I wonder why so many issues can be explained away with God’s intent but nobody can explain why God put a young man in Cold Spring to check on a guy with a gun?

I see a media that was — at least momentarily — obsessed with a dead cop’s possible relationship to a famous football player, as if that’s an important question at a time like this, especially when there are so many other questions needing asking and answering.

Even though he not related to me, my thoughts and prayers go out to officer Tom Decker, his family and the Cold Spring community

I want to make things all better for four kids in Cold Spring today and, of course, I can’t. I don’t know what to do and I recoil at the notion that the we are powerless to do anything but cry out and move on. But, perhaps, we are.