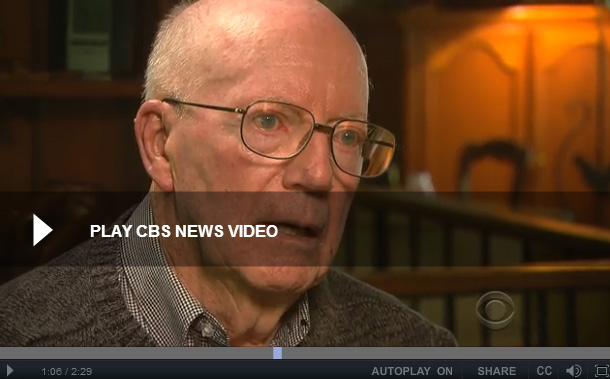 This week marks the 70th anniversary of D-Day, but for a Frederic, Wisconsin, man — Frederic is between Pine City, Minnesota, and Spooner, Wisconsin — one of the more memorable moments in the invasion had its 70th anniversary in April.

Doug Harlander, now 94, was an ensign in the Navy, aboard a landing ship during a full dress rehearsal for D-Day when all hell broke loose, CBS News reported. It was a disaster in the making when the landing ships’ armed escort had to turn back to port.

German patrol boats spotted the LSTs and just after 2 a.m., the unprotected convoy came under fire. LST 507 was struck by the first torpedo.

“All I saw was the big flash,” said Harlander. “All of a sudden it’s on fire.”

Minutes later, Harlander’s ship was ripped apart by two torpedoes that struck in quick succession. It sank in about six minutes.

“I got in the water. The thing was cold, 44 degrees and that is cold, cold water,” Harlander said. “I could move my elbow, my knees, but I couldn’t move my fingers. They were just straight out.”

Harlander hung onto a life raft for hours until a British ship fished him out of the water.

“They have me a cup of hot tea, but I couldn’t hold the cup with my cold hands. I spilled more of it than I drank. It was still the best drink I ever had,” he said.

He was among the lucky.

More than 700 men died that night. And for years the rehearsal was a secret. For the most part, this year’s reunion to mark the occasion was too.