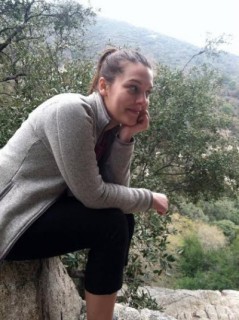 Sometime in June or July, if things work out as she hopes, Maxine Renning of Los Angeles will ride her bike into Minneapolis. She admits she’s not much of a cyclist but by then she will be. She’ll be riding from Baltimore and will stop here on her way to Seattle as part of a 4,000-mile ride to support people fighting cancer. That seems to be her specialty.

Maxine is the woman who donated her bone marrow to help keep Jenna Langer Vancura of New Ulm alive until she could no longer win against the cancers that kept the 28 year old in hospitals from the time she was a senior in high school. Jenna died earlier this month.

Renning is riding for Jenna.

It’s a bond first formed when Maxine was a senior in high school in Rhode Island. At an appointment to donate blood, she found she had a fever and couldn’t donate that day. So she signed up for the Be the Match bone marrow registry instead.

Some people who register can go decades and still never get the call. Renning went about a year.

That was never a consideration for her. “You’re basically killing someone,” she said.

There are different ways to donate bone marrow. For the donor, a less invasive method using blood requires multiple treatments over several months. Jenna didn’t have that kind of time, Renning recalls. So she went into the hospital “to have bone marrow sucked out of my back.”

How they came to meet was well documented in 2012, more than a year after Renning was first told she was a match for a then-26-year-old woman in the Midwest. Under the rules of Be the Match, the recipient and donor have to stay anonymous for a year. Eventually, they were introduced to each other at a Be the Match conference in Minneapolis.

“We always really wanted to get to know each other and be a part of each other’s lives,” she said. “It was a unique perspective that not only did we want to meet each other, but we were compatible as people.”

“Her family is an amazing family,” she said.

When Jenna announced on her blog last September that the cancer would take her life, Maxine knew.

“I was back in Boston for a graduation and she called me. “And she said she had some tumors in her head and they were going to try to fight it. Then I saw her in June in Iowa City and she had just had surgery… and that was the last time I saw her.”

Renning acknowledges struggling to put into words her journey with her once-anonymous recipient. “The whole mix of life and death… there’s this disease that wants to kill her… and then bringing powerful life back into it through my bone marrow and it’s working for awhile, but then ultimately killing her… it’s… amazing,” she said. “It’s not a feeling you can put into words. I don’t really understand it. It means so much to me but at the same time it feels like it was supposed to happen.”

The coming bike ride was to dovetail nicely with Renning’s first job after college — an internship on the Queen Latifah Show, which takes a summer hiatus May to August, allowing her to make the Baltimore-to-Seattle ride. Then the show was canceled.

“Now, I’m not in any position to pursue a full-time job,” she says, “knowing that I need to take the summer off.”

Not riding for her friend isn’t an option.

“I’d rather be unemployed and roughing it,” she said.