Faribault dance team gets its due 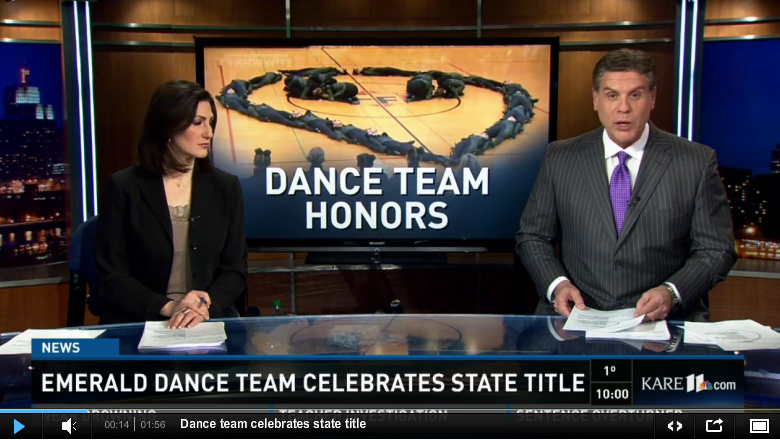 Snubbed by other competitors and their enabling coaches and parents, the Faribault High School dance team got a little love from their own community yesterday.

Faribault won the state high school dance team tournament at Target Center last weekend, over the objections of five other schools — Wayzata, Eden Prairie, Chaska, Eastview, and Lakeville South — who disagreed with the Minnesota State High School League ruling that their routine was legit. The suburban kids were disqualified when they disrespected the award ceremony and refused to stand with the winners.

So the staff and kids at Faribault High School threw a pep rally for the team after school yesterday.

“It’s the first time I’ve got tears since the thing happened,” coach Lois Krinke said (reported by the Faribault Daily News), “because I feel we were so robbed of this kind of moment. I don’t care about myself, but I know how hard these girls worked. Four-hour practices every day through Christmas break. After everything is said and done, the girls had to perform that dance.”

“This has made us so much closer and stronger and made us realize how much we do appreciate dance. “We don’t dance to win, we don’t. We dance because we love it, and that love and passion, personally for me, was taken away on Saturday,” senior Kristin Johnson said.

“Our final chapter in seasonal dance did not end how we pictured,” Johnson told the crowd. “But guess what? We are state champs and we are blessed to have led this team to victory.”

Earlier, Krinke gave the affluent Twin Cities teams some of their own medicine, claiming that dancers in the metro use professionals in developing their dance moves, a violation of the rules.

“I stand by what we did. Like I said on the radio, if they’re going to come after me for using a couple moves that have been done many times around the state of Minnesota, then they need to look at all these other dance teams that go to all these private dance studios in the Cities, and they get dances from these studios and take them back to the high school and use them,” Krinke told the Faribault Daily News.