Over the years we’ve provided plenty of examples of the perfectly-written obituary, in which we are invited to grieve the loss of someone we may not have known.

Today’s Star Tribune carries the obituary of Freddy Keillor. It is heartbreaking, joyous, wonderful, and horribly sad all at the same time. 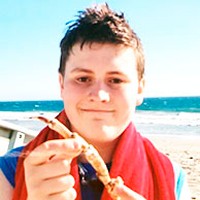 Keillor, Frederick James “Freddy” Age 17, of St. Paul. He caught his first fish at age five, only to immediately and frantically work to save its life. When the fish died, he demanded a proper burial along the banks of the St. Croix River.

Freddy had a St. Francis of Assisi-like love for animals, and a special affinity for St. Jude’s hopeless cases. Recently, a group of orphaned ducklings met a similar fate as that first fish, but not before he’d toiled for weeks trying to offer the motherly care they needed.

Frederick Keillor’s earthy journey ended much too early on Monday at the age of seventeen, leaving behind many questions as well as countless comforting memories of a gentle, sensitive soul who never balked at helping out all animals, humans included.

A brilliant mind who excelled at St. Paul Academy (even when he overslept), Freddy could master a debate class one year and win an anthropology poetry contest the next. Freddy spoke Chinese and built his own computer at the age of ten. A voracious reader and painter, his canvases revealed works that showcased his artistic gifts.

Drawn to water and nature, he wasn’t solitary. Freddy was wonderful with children even as a small child. His preschool teacher remarked that she felt comfortable leaving the room if Freddy was there.

The streets of St. Paul are slightly quieter this week. His proficient whistling is silenced, as is the SUV carrying Freddy and his mother, windows open, blasting 80s music, both of them singing along with off-key abandon.

We’d like to think the Big Next for Freddy is an outdoor picnic populated with all the animals he tried to save over the years, past pets (including Gus), and a new brood to care for. Nearby will sit all of those who went before him, including his grandmother Mary and great- grandmother Elsie, all the while surrounded by the pile of mismatched shoes he was always losing and a big tree to climb, like the one he mastered at age seven to get a better view of the river.