Venture capitalist is behind Save Lake Calhoun group

It’s always been a little difficult to determine who is behind the Save Lake Calhoun newspaper ads that have lobbied against a name change of the lake that honors former Vice President John C. Calhoun, the architect of forced Native American relocation and an ardent supporter of slavery. 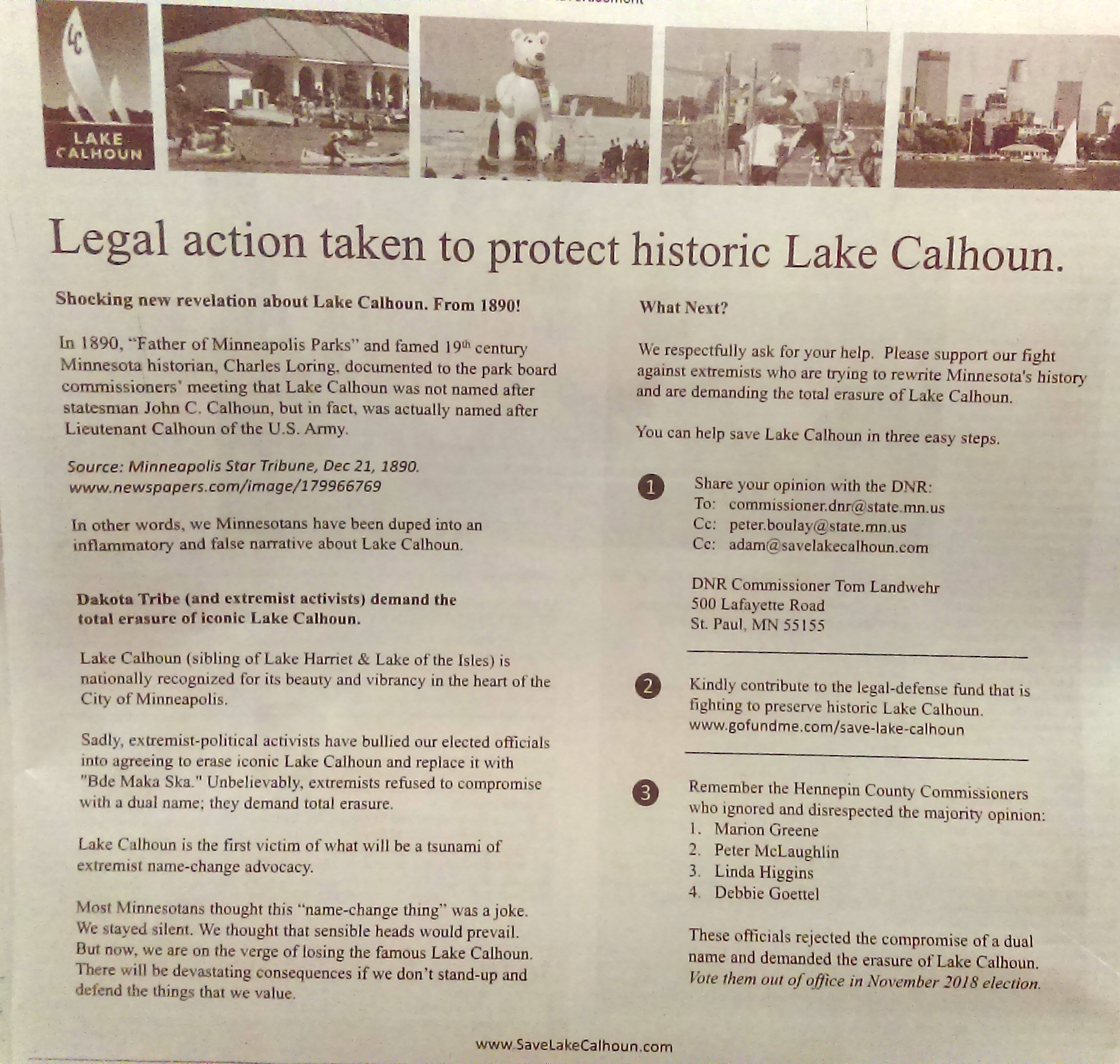 The group’s website lists no members, even though it has tried to raise money to continue the opposition to renaming the lake Bde Maka Ska, a change that was approved by Hennepin County Commissioners in November. The owner of the website was masked, email to an address went unacknowledged, and the site gave every indication the person behind the group wanted to remain hidden.

Now we know. It’s Tom Austin, a Linden Hills venture capitalist, best known for a Star Tribune commentary in October in which he claimed to have surveyed more than 300 residents of the area, nearly all of whom were said to have opposed the change.

Surprisingly, they feel that there is nothing inclusive about the name “Bde Maka Ska.” They are upset that American Indian activists seem to have hijacked the discussion and that public officials have not made a bigger effort (and process) to enroll the entire community in a discussion about what alternative names are “more inclusive” than Lake Calhoun.

These people raised a good question: What exactly have the Dakota Indians done that is a positive contribution to all Minnesotans? What is the heroism or accomplishment that we are recognizing in order to justify renaming the lake to Bde Maka Ska? Unfortunately, nobody had any answers.

The commentary did not contain any indication that Austin was head of the group opposing the name change.

But today a press release from a Minneapolis law firm, which has taken up his cause, identified Austin, CEO and managing partner of the F2 Group, a venture capital and private equity firm in Minneapolis, as the leader of Save Lake Calhoun.

The revelation isn’t particularly surprising. Austin submitted a petition against the name change at an October Hennepin County Board meeting days before his op-ed in the Star Tribune.

The release announced that Minneapolis attorney Erick Kardaal has sent a complaint letter (see letter)to the commissioner of the Department of Natural Resources saying the Hennepin County Board didn’t have the authority to change the name of the lake, a move which now is before the DNR.

Austin’s name wasn’t mentioned in the attorney’s letter, but in the press release he’s quoted as saying his neighbors were “overwhelmingly disgusted that public officials were spending all of this time and energy on the lake renaming issue when there are so many other pressing problems facing the community that need to be addressed.”