Sportswriter takes heat for suggesting Griffen at fault for his illness

I’m not going to condemn Star Tribune Vikings beat writer Mark Craig for articulating his obvious ignorance about mental health issues; I’ve been there. And there’s value in everyone seeing the sort of dominant thinking that has led far too many of our friends and neighbors to give up when seeking help for their illness, and deciding to end their lives rather than live in a world of personal pain and public shame.

I, too, was ignorant once. It was when Sherman Douglas, then a player for the Boston Celtics, sought help for his depression. “How is it Sherman Douglas can be an NBA player making millions of dollars and still be depressed?” I said on the popular bulletin board of the day.

I know now, of course. I got enlightened.

In time, Craig likely will be too. And, in time, perhaps, he’ll be as embarrassed by his observations on Twitter last evening as I still am about mine all those years ago.

In a series of tweets — mostly deleted now — Craig suggested that Everson Griffen, the Minnesota Vikings player who apparently had a break with reality in the last few weeks and is now getting some help for mental health issues, owes people an explanation for his actions and must take responsibility for his illness. 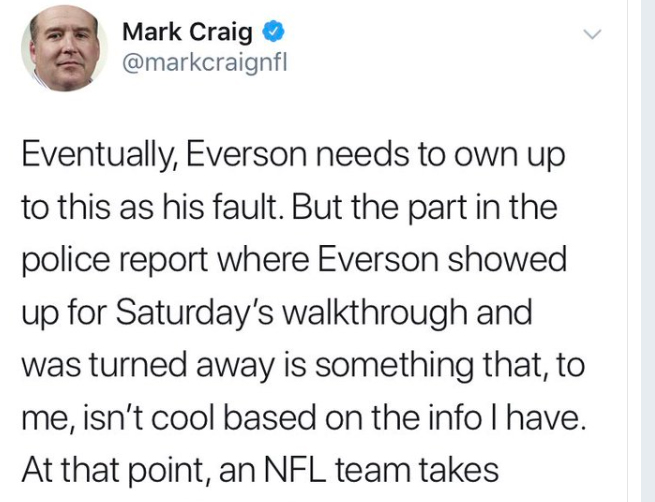 This, of course, is absurd. It is also a widely held view, particularly in the testosterone-fueled world of sports and sportswriting where any weakness is a character defect.

Let’s be clear. Griffen does not suffer from a character defect; he has an illness. It is no more a fault than it is the fault of a cancer patient that his/her body is turning on them. 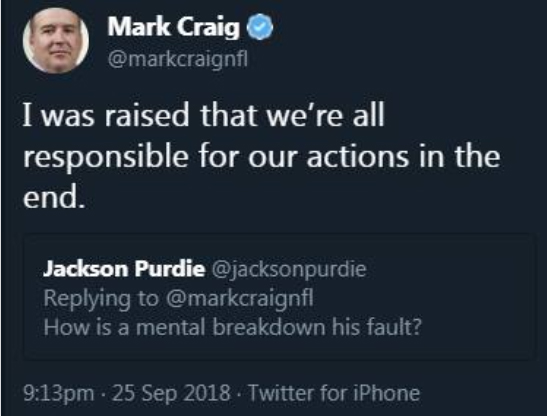 If there’s a bright spot in the twitter flare-up, it’s that Craig was almost universally condemned; something that would never have happened in Sherm Douglas’ day.

Mark, for someone who usually presents a considered & respected viewpoint this is a very misunderstood, naive & disappointing opinion. As others have said it's rarely a person's own fault they suffer from mental health issues. I suggest you learn more about mental health issues

For instance, I have medication for my mental illness. I have the perfect life — great job, wife, daughter, home.

But my brain has decided to not create the substances needed for me to feel normal — by no fault of my own.

You can’t condemn people into understanding mental illness. You shouldn’t call for someone’s firing because he holds a still-dominant — if ignorant — view. You educate them in real time, preferably before the learning comes at the horrible cost of firsthand experience.

Like many, my family has been affected by mental health issues that required serious help. I made insensitive comments regarding important health issues in a tweet yesterday. That was dead wrong. Please accept my apologies.