In Vermont, Keillor finds onetime fans not ready to forgive 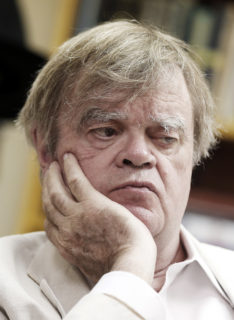 Garrison Keillor will remain persona non grata in Vermont after a book festival where he was scheduled to appear pulled the plug on a fundraiser.

Keillor offered to attend the Vermont book festival for free, according to its organizer.

“I talked to my wife, I talked to some friends,” Rick Kisonak tells Vermont Public Radio, “and you know we just, we kind of came to the conclusion that it was an offer that we probably shouldn’t refuse.”

“If the person has for most of his life, you know, done good work and been a good person and has been an incredibly important contributor to an area of the culture that I care very, very profoundly about, wants to try to make amends by showing support for a little literary festival by the lake and go to all the trouble to come here and, as I say, face whatever music awaits — I just felt like ‘OK,” Kisonak told VPR.

It’s not OK, many women said.

“Women have opportunities to discuss these issues literally every single day, so giving this man a platform when so many survivors have been silenced for so long is disgraceful,” said Rebecca Cross, one of those who joined in the calls for cancellation.

It has come as a considerable shock that some have been so quick and careless in conflating his recent history with that of people like Bill Cosby and Harvey Weinstein. Garrison Keillor is not a sexual predator. We’re all people who place great importance on the value of words. Can we agree that the difference between ‘predatory’ and ‘inappropriate’ is considerable and significant?

I have never invited a sexual predator to the Burlington Book Festival and never would. I don’t condone the inappropriate treatment of women. Never for a minute was it my intention to be insensitive to survivors of sexual mistreatment or abuse. Other than responsibly generating revenue for my nonprofit organization, my only interests were in providing Garrison Keillor’s fans with the opportunity to see him while, at the same time, hopefully opening the channel for a conversation with the potential to illuminate, investigate and possibly even heal.

It’s a bad choice — particularly now — for men to be lecturing women on the degree to which sexual harassment should be tolerated. The organizer’s response came off as tone deaf.

“When so many survivors of assault and harassment have been silenced because their harasser had power over them (as Keillor did over his victims), it’s disgraceful of you to allow a perpetrator to speak at your festival,” Cross responded. “Your statement here does not show any understanding of what survivors are going through right now or any sensitivity toward us.”

Late last evening, the Festival threw in the towel.

“No insensitivity to anyone was ever the intent,” Kisonak wrote in an email to VPR. “But the unexpected reaction on social media made it apparent some people viewed his booking as our condoning of sexual harassment. Nothing could be further from the truth.”