A divide at the intersection of sports and politics 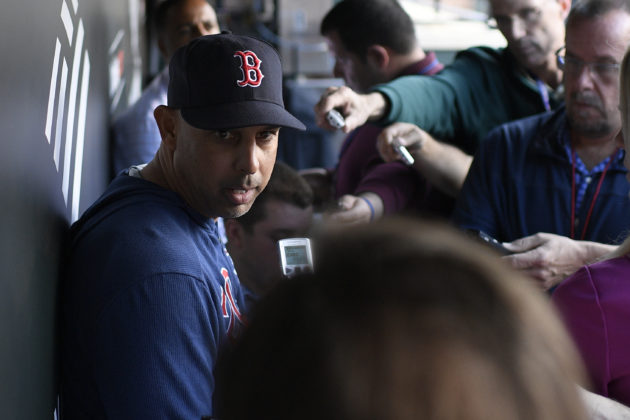 A typical Major League Baseball team is a melting pot of camaraderie — whites, blacks, Asians, Latinos all united in pursuit of a common purpose. We could all take a lesson.

Except that sometimes, a different truth is revealed — a racial and ethnic divide that isn’t much different than the rest of society.

That’s the assertion, anyway, that comes with yet another sports team’s cliched visit to the White House, in this case the World Series Champion Boston Red Sox on Thursday.

The white players are going; most of the players of color are staying home.

Manager Alex Cora announced he would not go because he didn’t think it would be right to celebrate in a White House that has left the island commonwealth to suffer from Hurricane Maria. Sportswriters, most of whom have no interest in biting the hand that feeds them, sought out him and players of color to ask them why weren’t going.

But that was the wrong question, Jemele Hill writes on The Atlantic. They should be asking why the whites are going.

The majority of the Hispanic and African American players on the Red Sox—including the pitcher David Price and the 2018 American League MVP, Mookie Betts—have also declined to attend. Not all have explained their reasons, but the Mexican-born relief pitcher Hector Velázquez has been honest. “I made the choice not to go because, as we know, the president has said a lot of stuff about Mexico,” he told MassLive. “And I have a lot of people in Mexico that are fans of me, that follow me. And I’m from there. So I would rather not offend anyone over there.”

Black and Hispanic players and coaches are expected to justify their reasons for not going to Trump’s White House. But the real question is: Why have so many of the white players on the Red Sox chosen not to support their black and brown teammates?

Try as some sportswriters might, the divide is impossible to ignore, the Washington Post’s Dave Sheinin writes.

But ignore it he did, not asking any white players why they were going, and providing only a declaration from a team official that there’s no there there.

“We were concerned about that and understood it might be a possibility,” Red Sox CEO Sam Kennedy said in a telephone interview about the divide along racial lines. “We’ve just made it very clear to the players it’s their choice and it’s their right to attend or not attend. We’re pleased our players have not only talked about it among themselves in the clubhouse but also with us.

“I hope the players are happy with the way it has been handled, which is [by making clear] that this is an honor. This is not a political statement of any kind. We knew an issue like this could become divisive, so we addressed it. There’s no division in the clubhouse that we know of right now.”

Compare those comments with those of David Ortiz, as close to a Red Sox god as any ex-player, who says he’d be in lockstep with Cora.

“Of course, bro,” he tells WEEI. “Alex is in a tough spot right now, going there and acting like nothing is happening. It’s like you are going to shake hands with the enemy. Think about it, all the stuff that has been going on since he took office. People are angry. People are mad. He has divided people, that’s how it feels like.”

To be sure, even if sportswriters did ask white players why they were going, it’s unlikely their answers would be honest enough to confirm what seems obvious — that these are largely political events now and the polarizing effect of politics isn’t stopped by some dugout force field.

“This is critical,” Ortiz said. “Listen, when I first came into this country the one thing I always have been proud of is learning how to stay together. That’s one thing that I’m proud of coming into this country. That’s not the situation right now.”