An editor pens a worthy tribute to her colleague

It takes a lot of nameless people to make a newspaper — or any other news medium — go. 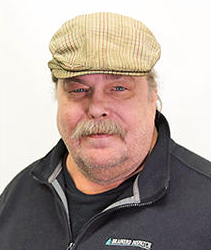 In a lovely tribute to her colleague, who died earlier this month, Brainerd Dispatch community editor Chelsey Perkins, shines an appropriate spotlight on Bob Wallenius, who put the newspaper’s pages together. He was only 61 when he died.

We should all be so loved by our co-workers.

“In the moments between finishing his last page and awaiting approval, he and I often had our most intimate chats—sharing snippets of our lives or seeking and giving advice. It meant so much when he requested a rare night off recently, just to watch me perform in community theater,” she wrote.

We tell ourselves our workplace isn’t really our family; it’s just a business. How do we explain, then, our familial nature when our colleagues are dying?

Late last month, Bob got sick. In the blink of an eye, he was in intensive care. Managing Editor Renee Richardson and I brought him his small stuffed bear he named “Cubby,” one of his gifts when the Cubs won the Series that sat perched atop his computer tower ever since. He was asleep when we visited that night, but Cubby was there to greet him when he woke. And he did awake, and it seemed he would recover.

That dissolved the morning of May 6, when I got this call: Bob wasn’t going to make it through the day. Gobsmacked, I raced out of bed, put on a Twins shirt and grabbed my Bluetooth speaker. If Bob was going to die today, I thought, I wanted him to experience as many things he loved as I could make happen.

So that’s what we did. Renee read him more Cubs news than she’d ever consumed before by a long stretch. They were on a seven-game winning streak that day, and Bob would’ve said, “Alright!” if he could. I filled him in on the No. 1 team in baseball, the Minnesota Twins. We played him a cover of “Pick up the Pieces” he loved, and “Uptown Funk” made an appearance along with another favorite, the Andrews Sisters. We sat with him for hours this way, switching between talking to him and sharing memories of him.

Others arrived, including his best friend and goddaughter, who left Indiana before dawn to see him. They draped him in a Cubs blanket and joined us in our vigil.

I learned things about Bob I never knew, like he was a painter and chalk artist, for one. I longed to talk to him in a way I never had—to hear his laugh, to see his smile. I thought of everything I wished I’d said to him. I thought of how I would never catch a glimpse of his signature hat and blazer across the newsroom again, or hear him greet me with, “Hey, pally!”