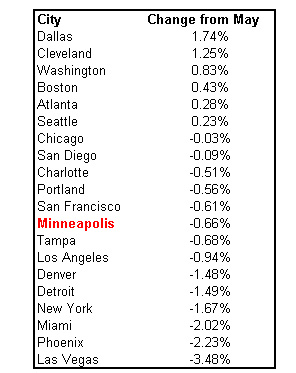 “What impresses me no matter how you look at it… the story comes up again and again: there is some serious improvement. We’ve taken the first step toward beginning to turn this around,” said David Blitzer, who runs the Case-Schiller Index. He fairly gushed today over the April results of his survey, which tracks resale price of homes around the country.

The index showed a .6% drop in home prices, which these days qualifies as great news.

In Minneapolis, the drop in resale prices mirrored the nationwide average (-.66%), the ninth consecutive month of declining prices, but the lowest drop during that period in which home resale prices dropped here about 16 percent. They’ve dropped 22 percent in the last year. Good times, indeed.

“In 13 of the 20 cities the decline is less than last month,” Blitzer said this morning. “Some people out there are feeling a touch better and are willing to go out and look at a house and in some cases are willing to buy a house.”

House resale prices in April 2009 are roughly the same here as they were in August 2000.