The consequences of a bad day at work

Today in Paris, an appeals court threw out the manslaughter conviction of a mechanic for Continental Airlines in Houston .

Mechanic John Taylor worked on a DC-10 in Houston and he fitted a metal strip on the plane that looked like this: 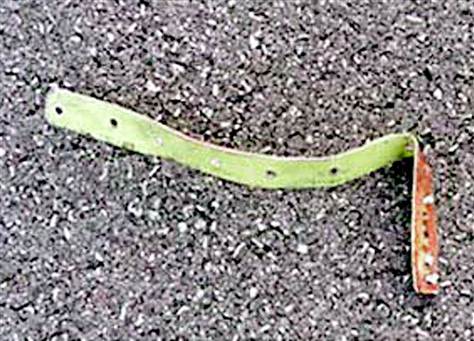 When the DC-10 went to Paris, the strip fell off on the runway.

Coincidentally, the Concorde’s tire hit the strip, the tire blew into bits, one of the bits hit the Concorde’s fuel tank, the fuel tank caught fire… and the Concorde was traveling too fast to abort the takeoff. So the pilots launched into the air.

A terrible situation. But criminal?

“He could never have imagined a scenario where this simple titanium blade could cause such a disaster,” the French judge said of the mechanic, who had improperly used a titanium strip instead of a softer aluminum one.

“It reminds us that human error, regardless of the tragic outcome, is different from a crime,” William R. Voss, president of the Flight Safety Foundation in Alexandria, Virginia, told the New York Times.

As for the mechanic, news organizations have been unable to reach him today. But two years ago he told the Associated Press the case caused him “mental anguish” and “destroyed my life.”

“I’ve been nothing but wronged since this started,” said Taylor.

He said the case also prevented him from gaining U.S. citizenship. He’s a Danish citizen, but has lived in the U.S. since he was 3.

All because of one small mistake at work.