Too much ‘thank you for your service’? 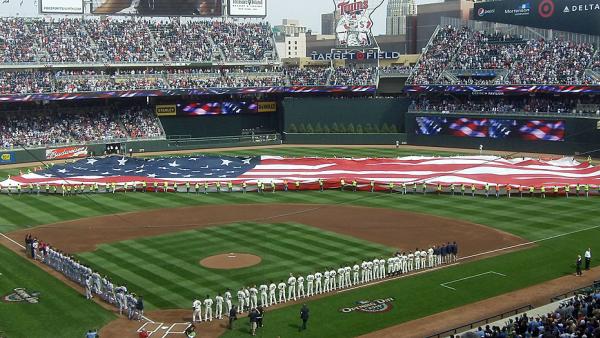 The Minnesota Twins, like most other sports teams, go out of their way to honor veterans. During the National Anthem, a veteran raises the flag to tremendous and warranted cheers.

The Minnesota Timberwolves introduced a veteran at many home games last year, bringing bigger cheers than the players were able to elicit.

At this year’s baseball All-Star Game, one veteran from each team’s home state was introduced along with the players in a promotion sponsored by People Magazine.

It happens at most sporting events in America now. It tugs at the heart. It brings a response. And, apparently, some veterans hate it.

When the seventh-inning stretch comes and I hear the dread ballpark public-address announcement, “Ladies and gentlemen, please stand and doff your hats for the singing of ‘God Bless America,’ ” I head for the beer stand.

Likewise, I feel queasy about being asked to stand and applaud wounded fellow veterans who’ve been rounded up in the stands behind home plate for their fleeting moment of appreciation before the shuttle bus takes them back to Walter Reed.

And I’m hardly alone. Consider this war widow, drafted into a memorial service for her husband and other dead soldiers: “Whoever had the idea that a grieving family should stand for 40 minutes with Toby Keith singing ‘American Soldier’ in the background and be forced to shake hands with and hug strangers who say the STUPIDEST things like ‘Congratulations’ to you and your children needs to go a round in the ring with me,” she says in David Finkel’s heartbreaking Thank You for Your Service.

Stein reviews Finkel’s book, which details the struggles of the men he followed in Iraq as they have returned to the United States, and Andrew Bacevich’s Breach of Trust. But he saves his criticism for us — the ones who went shopping and slapped yellow ribbon magnets on our cars.