Young blacks want to end injustice unseen by many 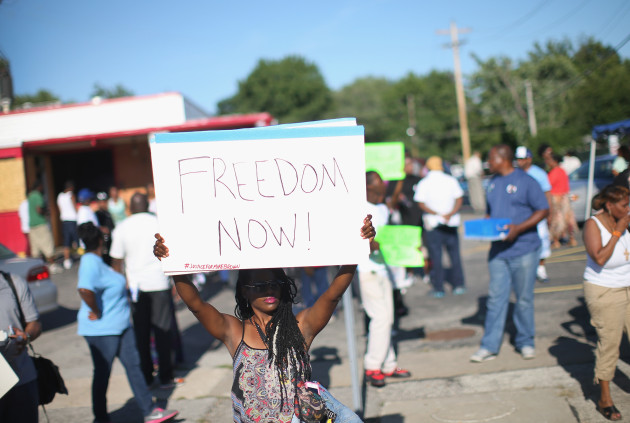 A Demonstrator protesting the shooting death of teenager Michael Brown holds up a sign on August 13, 2014 in Ferguson, Missouri. (Scott Olson / Getty Images)

There is a tendency among many in the United States to view young black men as dangerous.

As Morehouse College professor Marc Lamont Hill has said, many whites view black men as unintelligent and immoral — prone to violence and irrationality.

The events of the last two weeks in Ferguson, Missouri, where protests erupted after a police officer shot and killed an unarmed 18-year-old black man, likely cemented such preconceived notions in some minds.

But the situation in Ferguson is complex and one that is rooted in a legacy of exclusion, discrimination and injustice.

As Joel Anderson writes in BuzzFeed, many of the protestors from Ferguson and the surrounding inner suburbs of St. Louis say they have been harassed by police.

That many white Americans don’t understand that — or the larger significance to Michael Brown’s death — is itself understandable given their limited interaction with black people, writes Robert P. Jones in the Atlantic. It’s hard to empathize with others when you mostly live and work with people like you, who share the same mindset.

The chief obstacle to having an intelligent, or even intelligible, conversation across the racial divide is that on average white Americans live in communities that face far fewer problems and talk mostly to other white people.

Many young black men have been caught up in the criminal justice system. But that owes much to persistent in equity in education, employment and opportunity — disparities have created a caste system that keeps many blacks on the bottom rungs of American society, describes Michelle Alexander in The New Jim Crow, Mass Incarceration in the Age of Colorblindness.

Parents and schoolteachers counsel black children that, if they ever hope to escape this system and avoid prison time, they must be without complaint, stay in failing schools, pull up their pants, and refuse all forms of illegal work and moneymaking activity, even if jobs in the legal economy are impossible to find.

“When black youth find it difficult or impossible to live up to those standards — or when they fail, stumble, and make mistakes, as all humans do  — shame and blame is heaped upon them,” Alexander writes. “If only they had made different choices, they’re told sternly, they wouldn’t be sitting in a jail cell; they’d be graduating from college.”

In Ferguson, the protests have evolved into a movement that could spur young blacks to not only push for change in their community, but also in themselves. The slain teen’s friends are determined to go to college -– a future he was robbed of -– and help others.

“Brown’s death has not only jolted many young people into consciousness and action, including daily protests, but it has also created a collective trauma of sorts,” Akilah Johnson writes in the Boston Globe. “It has deepened the stress of being young black teens living in areas of concentrated poverty and crime — and prompted at least some teens to think beyond themselves.”

David Cazares is an editor for MPR News. He also writes about jazz and Latin music.