The science of pedal pub hatred 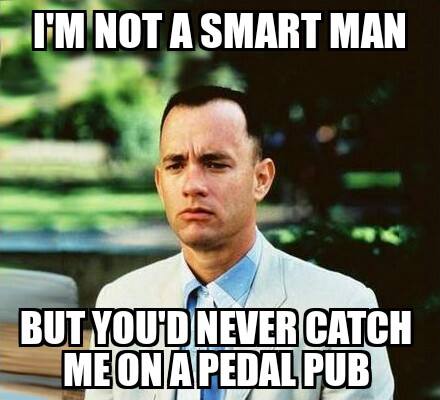 The hatred of pedal pubs, which fueled a squirt-gun attack on a group of off-duty cops last week in Minneapolis, has deliciously reached the ivory towers of academia.

Star Tribune reporter John Reinan has gotten to the bottom of why “we” hate pedal pubs.

Yes, they’re noisy and the people get drunk, but this is in a state built on alcohol and where economic development is a taproom, so there must be more.

We’re looking at you, social media.

“I think that is very definitely a factor,” said William Beeman, chairman of the Anthropology Department at the University of Minnesota. “You get something you’re interested in pursuing, and you have no idea whether anybody else feels the same way. And all of a sudden, you see that other people do feel the same way. You feel empowered, you feel like you’re a group that now has some legitimacy because of the numbers involved.

“And very likely, the large numbers give people who would like to take an action some feeling of support,” Beeman said. “If I take some action, I’ll have my community behind me.”

But surely it must be more or we’d just whip up an “I Hate the Achievement Gap” Facebook page.

Reinan raises another possibility — hatred of the suburbs.

But you own this baby, Minneapolis.

One misconception about the pedaling pubs is that they’re full of suburban residents coming to get drunk in the city. That’s false, according to PedalPub and its competitor, Traveling Tap. Minneapolis residents make up more than half the customers of both businesses, the managers said. And the pubs’ visibility makes them an easy target, said Dan O’Brien, operations manager for Traveling Tap.

The nonsense has also reached the Strib’s editorial page today.

Online, some are celebrating the PedalPub bandits as folk heroes. They’re not. The attacks could have caused the vehicle to swerve into traffic or riders to fall off. Like it or not, Twin Cities PedalPub is a business operating with regulatory approval in the Twin Cities. Customers bring their own beer and drivers, who are employed by the company, are not allowed to drink.

It’s worth noting that many motorists consider bicyclists to be traffic-blocking nuisances. Imagine the uproar if drivers took the law into their own hands and pelted cyclists with water balloons.

Maybe there isn’t any real science here at all. Maybe it was just a situation where a few knuckleheads had nothing to do and thought it would be funny.

As someone on the MPR Facebook page analyzed, “this story has multiple layers of stupidity.”