Making a buck on the flag

We’ve seen tackier uses of American flag references — just see Nikki Tundel’s fine photo series on the subject today (an annual tradition in this space) — than the plan by Major League Baseball to dress up its players in stars and stripes on Flag Day Sunday.

But we’re heartened nonetheless by a growing chorus of sports fans recognizing that one of the best ways to disrespect the American flag is to use it to make a buck.

Here’s the jersey for the Twins. 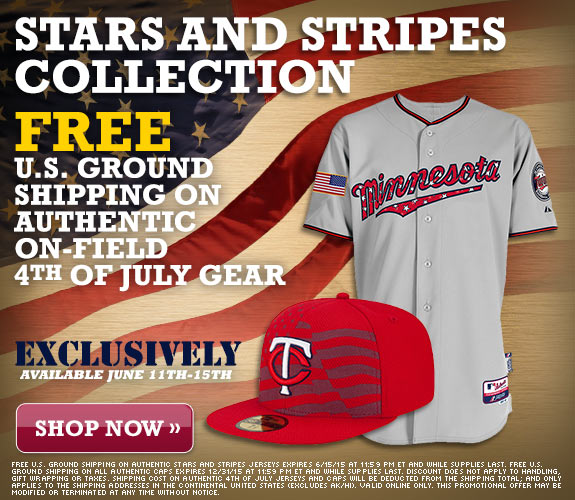 Personally, I give it a big “meh,” but Paul Lukas at Uni Watch has had about enough of this cashing in on perceived patriotism stuff.

• Most of these look embarrassing, and the handful of exceptions are diminished by being part of a cookie-cutter template that feels more like a corporate marketing initiative than a holiday celebration.

• As I’ve noted before, more than a quarter of MLB players are not Americans, and it seems really odd to make them wear American flag imagery to celebrate our holiday. Is it a privilege to play in the big leagues? Yes, for sure — that’s why foreign-born players have to apply for work visas, pay American taxes on what they earn here, follow our laws, and so on. And I absolutely believe a player should wear whatever uniform is put in his locker, even if it’s an ugly American flag jersey and a cap that looks like it should be sold at a gas station — that’s part of his job. But my point isn’t about the players; it’s about us. These people are our guests; we are their hosts. And part of being a good host is being gracious. I think it would be more gracious not to expect so many foreigners — a quarter of the game’s labor force! — to wear our flag on our holiday. If I were working overseas, I certainly wouldn’t be thrilled if my employer expected me to wear his/her national flag on his/her national holiday.

• As in the past, MLB will be donating the net proceeds from sales of these jerseys and caps to Welcome Back Veterans. That’s nice, but Independence Day has nothing to do with veterans or the military — it’s the anniversary of the Declaration of Independence’s ratification. So MLB is once again mixing bad design with bad civics, misrepresenting the meaning of an important holiday, and singling out the military for glorification. Unsurprising but still highly disappointing.

From baseball’s perspective, it makes sense to donate money to a veterans organization; professional sports has mastered the art of marketing the military.

Where would Lukas rather see the money go? He suggests the National Archive, where the Declaration of Independence is housed.

“I love the American flag and I love Independence Day,” he says. “Both deserve better than this.”