Two Twin Cities airports are included in a rash of drone “close calls” with aircraft, according to reports filed with the Federal Aviation Administration.

The Washington Post, which obtained the reports, said more than a dozen incidents occurred on Sunday alone, a fact the FAA apparently wanted to keep secret.

Since the beginning of the month, there have been more than 70 “close calls.”

In St. Paul on Monday, a helicopter pilot reported a drone came within 50 feet, while flying about three miles northeast of the city. The drone was monitoring a protest, according to the newspaper.

Earlier in the month — August 3 — a Shuttle America pilot said a drone was operating within 50 feet of the jet as it approached Minneapolis St. Paul International Airport at about 1500 feet.

Despite a prohibition against small drones flying within five miles of airports or above 400 feet, the FAA documents show that the robotic aircraft have become pervasive intruders, hovering near runways and busy air traffic corridors.

Pilots are also spotting the small drones at altitudes previously unheard of — higher than 10,000 feet. On May 30, crews from Caribbean Airlines and JetBlue separately reported seeing a drone with colored lights at an altitude of 12,000 feet about 25 miles southeast of John F. Kennedy Airport in New York.

The FAA reports are brief and preliminary in nature. In some cases, follow-up investigations determined that objects pilots had assumed to be drones were in fact something else.

Officials, obviously, are worried about terrorist threats, but the threat posed by people with drones who don’t know airspace rules also represents a threat.

As MPR’s Euan Kerr reports, for example, Minneapolis Institute of Art and Thomson Reuters confirmed that MnDOT had ordered them to stop flying an unmanned aircraft system that is documenting the progress of crop artist Stan Herd’s reproduction of Vincent van Gogh’s painting “Olive Trees” on a one-acre plot owned by Thomson Reuters in Eagan.

The organizers said they had complied with rules not to fly within five miles of an airport and to stay below 400 feet, but that ignored that the plot of land falls within MSP’s so-categorized Class B airspace, which extends from the surface to 10,000 feet, as indicated by the inner ring on an aviational sectional chart. 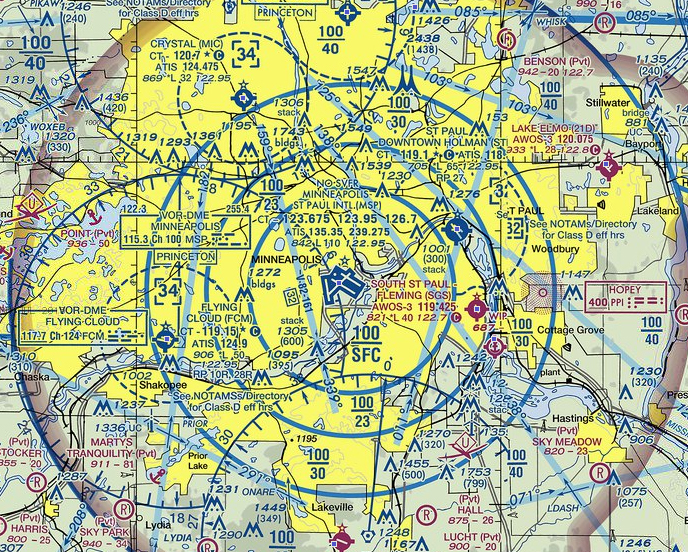 Regulations announced in February by the FAA would prohibit drones inside that airspace without previous permission.

“There is a big difference between what is not recommended and what is actually illegal,” former National Transportation Safety Board Chairman Jim Hall wrote in an op-ed this week. “While endangering an aircraft is already a federal crime, trying to shoe horn that rule onto unregulated drones is problematic.”

Some drone makers’ software — DJI’s, for one — make the aircraft inoperable within 1.6 miles of airports like Minneapolis St. Paul. But that distinction has little to do with the FAA’s Class B designation, which extends roughly to Highway 52 to the east and highway 55 to the southeast.

“It’s far too early to call the situation a crisis,” CityLab’s Julian Specter wrote this week. “Finding that regulatory balance isn’t easy when it comes to technology. Laws shouldn’t be hypothetical; they should respond to real needs and dangers of the populace. But if lawmakers wait too long to figure out those dangers, they end up watching drones shut down firefighting operations because nobody anticipated that would happen when the products first appeared on the market.”