End of the line for the skyway to nowhere

St. Paul is about to lose one of its most distinctive and quirky downtown landmarks.

“The skyway to nowhere.” 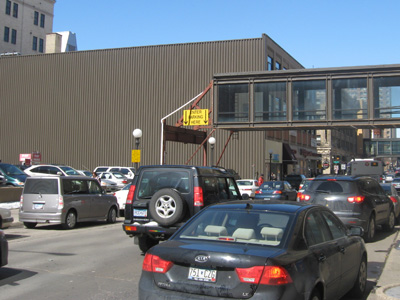 It wasn’t always thus. It once carried lost souls to an office building whose only real purpose in its latter years was to provide cover for people who were walking through it to get over to the the Hamm Building, although it also held one of the friendliest branches the U.S. Postal Service ever created.

When the building was torn down in 2002, the post office moved to the Hamm Building (until it closed a few years ago) and the skyway remained as a symbol of hope for the city’s downtown. Surely it would soon connect the Macy’s building to another building that would rise on the site. And, indeed, a developer had a plan for just that. But it never materialized. A surface parking lot stands there now. Macy’s has since closed.

But the Skyway to Nowhere’s days are numbered, the Star Tribune reports.

The St. Paul Port Authority is tearing it down to make way for cranes and other equipment that will be used to renovate the Macy’s building, which is going to be a practice rink for the Minnesota Wild.

The parking lot? Nothing will ever happen on that site. Any developer who puts a building up there, would be required to build another skyway across Wabasha Street.