The danger of flying low over the Mississippi

It will be some time, of course, before federal investigators release the cause of the plane crash near Ramsey last evening, in which a Cessna plunged into the Mississippi River, the fourth fatal plane crash in Minnesota in 2017.

But the Star Tribune’s report from a witness provides a possibility.

Witnesses who called 911 reported the plane was flying low — at or below the treetops — and heading upriver when it hit power lines stretched across the river and “did a nose-dive into the river,” he said. According to witness statements, the plane did not appear to have engine trouble.

“Why the pilot didn’t see the power lines or why he was flying low … we are unsure,” Erickson said.

The Mississippi River — any winding river, really — has always been inviting to pilots to fly low along its winding course. The scenery is beautiful, the sense of speed of an airplane is enhanced, and the perspective is unmatched.

“Those lured by low flying often do not consider the possibility of tangling with wires or striking birds, the likelihood of which increases as one gets closer to the ground,” Barry Schiff, an airline pilot and columnist for the Aircraft Owners and Pilots Association, writes. “Another problem is that low-flying pilots do not allow sufficient time and altitude to cope with mechanical problems that can develop. Inadvertently running a fuel tank dry might only be an annoyance at altitude, but the same experience at 100 feet can force a landing with little or no choice of landing sites.”

But some pilots do it anyway.

Power lines across a river are indicated on pilot navigation maps, but a lot of pilots no longer use the maps or pay attention to much detail, depending on a GPS instead. 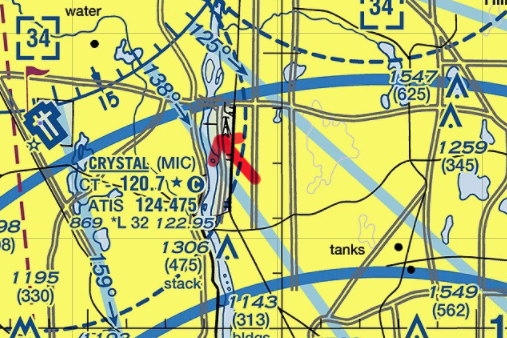 I had a friend a few years ago who posted a video of his flight down the Mississippi south of St. Paul, skimming the surface no more than a foot or two above the water. He was lucky because there aren’t many power lines across the river in that area once you get past the Wakota Bridge. I doubt whether he knew it one way or the other.

We urged him to stop doing it and, at the very least, take the video down so the FAA wouldn’t see it.

One problem is the FAA regulations are vaguely defined. Pilots are required to fly at least 1,000 feet higher than the tallest structure over “congested” areas and fly at least 500 feet high over “other than congested areas.” The rules allow them to fly lower as long as they don’t come any closer than 500 feet of any person, vehicle, or structure.

The FAA doesn’t define what constitutes a structure. Is a power line a structure?

In the absence of such detail, it expects pilots to use common sense, fly safely, and listen to the old-timers’ admonishments that just because you can do something doesn’t necessarily mean you should.