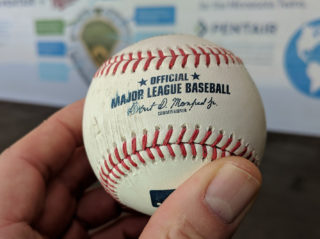 For a little less than a week, Jason Gabbert was the most hated person in Minnesota sports, based on the Star Tribune’s report of how the Minnesota Twins have banned him for a year for his aggressiveness in chasing foul balls in the nice seats behind the dugout.

A Hennepin County judge has already dismissed Gabbert’s claim that he was unfairly banned from the stadium.

The Twins said he was involved in four “incidents” last year and had a physical altercation in at least two of them, the Strib said:

Twins lawyers cite an affidavit from Carol Stenback, a Twins fan who was sitting in the section near another fan, Bradley Haddy. Gabbert “shoved his way into our row and he went over Brad and me to try to grab the baseball,” she wrote. She said that Gabbert repeatedly said “that’s my ball” as he tried to grab it.

Haddy wrote that Gabbert made physical contact with him and Stenback and said something like “get your hands off me” or “don’t touch me,” which Haddy said was surprising because it was Gabbert who initiated the contact. He said he told Gabbert to go back to his own row.

“The seats we had for the game were the best seats we had ever had for a Twins game and the man’s actions ruined our experience,” Stenback wrote, adding that a Twins usher approached her after the incident to ask how she was doing. “I told her it was the worst thing that has happened to me at Target Field.”

Another one appears in today’s letter to the editor in the Star Tribune.

I recognized Minnesota Twins fan Jason Gabbert from recent coverage in the Star Tribune about his alleged misbehavior while collecting baseballs at Target Field.

The allegations paint quite a different portrait of him than my family and I saw during a game this past season.

I witnessed Mr. Gabbert catch two baseballs in the first few innings and give both to children seated nearby. Gabbert later noticed my family seated a few feet away and asked my son if he was hoping to get a ball. Not long after, Gabbert was able to get someone on the field to toss a foul ball to my son, who was thrilled.

Several balls were thrown into our section that day and, other than the two thrown directly to him, Gabbert made no effort to pursue them or interfere with other fans.

Gabbert was friendly and polite to my family and everyone around him. He made three children, as well as their parents, very happy that day.

That, of course, is the way it should be done. Always give the ball to the kids.

There’s another aspect of the situation that is worth pointing out — in the really nice seats, there quite often aren’t any kids.