At cross-country meet, winning is secondary to sportsmanship

KARE 11’s Boyd Huppert confirmed anew a long-held personal observation I’ve had over the years of watching high school sports. If there’s an act of sportsmanship, it probably comes from the track-and-field and cross-country kids, and it probably involves a female athlete.

He told the story of Liana Blomgren, a senior cross-country star from Mountain Lake High School who was near the finish line in a race in Luverne last month when she came upon Gracie Bucher, an 8th grader from Windom who had fallen.

Bucher was just behind the final individual state qualifiers in the Section 3A meet, while Blomgren was near the top 20 at the time, the Windom News said when it first reported the story in October.

All Blomgren had to do was keep running. But she didn’t.

She stopped to help Bucher to the finish line, ending her high school track career.

Helping another runner is grounds for disqualification for both runners.

It is an unfair act when a competitor receives any assistance. Assistance includes:
a. Interference with another competitor.
b. Pacing by a teammate not in the race or persons not participating in the
event.
c. Competitors joining or grasping hands with each other during a race.
d. Competitor using an aid during the race. 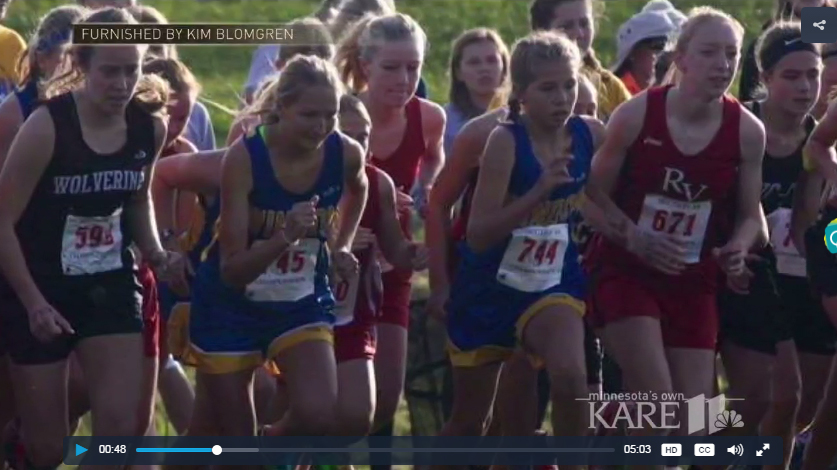 If this story sounds at all familiar, you’re probably thinking of Kailee Kiminski, a senior from Esko, and Tierney Winter, a junior in Janesville, who forfeited their race in 2014 to help Jackson County Central freshman Jessica Christoffer cross the finish line. All three were disqualified, but the Minnesota State High School League nominated them for a national sportsmanship award.

Where do kids learn these things? Watch the entire YouTube video above, and listen to the fans and parents cheering on every kid.

They learn it from them.